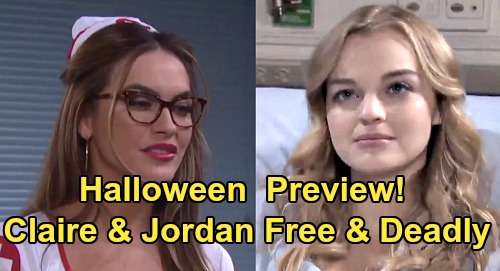 Days of Our Lives (DOOL) spoilers tease that Salem will deliver quite the horror show on October 31. DOOL always has a little fun for the spooky holiday. They tend to offer a dream episode or some sort of alternate reality, so this year may be more of the same. Some exciting things are in store, so we’ve got a Halloween preview for you.

First, let’s talk about a big comeback. Days of Our Lives spoilers say Olivia Rose Keegan will reprise her role as Claire Brady. DOOL fans know Claire was sent to Bayview, where she’s hopefully been recovering and getting her life together. However, Claire’s in for a shock when Jordan Ridgeway (Chrishell Hartley) shows up in a nurse’s costume. Jordan will insist on stirring up some trouble, so she’ll help Claire escape.

Meanwhile, Ben Weston (Robert Scott Wilson) will surrender to his dark side. He’ll let himself fall back into old habits, so that doesn’t sound like the Ben we know. Days of Our Lives constantly pushes the “Ben’s changed” angle. He would certainly kill someone in self-defense or to protect someone else, but this makes it sound like he’ll be driven to straight-up murder again.

That lines up with the Halloween fantasy idea as well, but anything’s possible with this time jump looming. Jordan will indeed be completely losing it soon, and Ben will land in hot water over some stunning accusations. Days is building toward some major curveballs.

Regardless, it’ll be great to see Claire again and find out what mischief she’ll make with Jordan. As for Ben, will he go after Jordan in his devious dreams or in the real soap world? Either way, Jordan makes the most sense as Ben’s target.

Days of Our Lives spoilers say the action will heat up for some other Salemites, too. Over with Tony DiMera (Thaao Penghlis), he’ll drop a bomb on Marlena Evans (Deidre Hall). There’s no word on what that might be, but Anna DiMera (Leann Hunley) may get in on this drama eventually.

It sounds like Halloween will pack in plenty of fantastic moments, so don’t miss what’s brewing. We’ll give you updates as other Days news comes in. Stay tuned to DOOL and don’t forget to check CDL often for the latest Days of Our Lives spoilers, updates and news.