BY hellodrdavis on October 18, 2019 | Comments: one comment
Related : Days of Our Lives, Soap Opera, Spoiler, Television 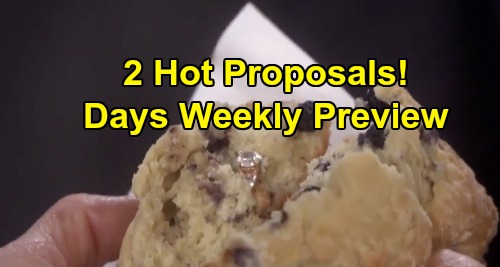 Days of Our Lives (DOOL) spoilers tease that fans will see a major romantic reunion and two big marriage proposals during the coming week. The new DOOL promo for the week of October 21-25 is all about love and romance in Salem, and the joy of two legacy couples who have found their way back to each other, as well as some…baked goods.

Let’s start with the big romantic reunion of Jack Deveraux (Matthew Ashford) and Jennifer Horton (Melissa Reeves). DOOL fans have been waiting for months to see Jack and Jennifer reunite. Ever since Jack returned to Salem back on New Year’s Eve, things have been pretty rough for Jennifer. She’s had to watch her husband take up with Eve Donovan (Kassie DePaiva) and do things that he never would have done in the past, as the “real Jack.”

But fortunately, Jennifer now has her beloved Jack back, thanks to a blow to the head during his altercation with Henry Shah (Piter Marick) after Henry kidnapped Jennifer. All of Jack’s memories came flooding back, and now he wants to be with Jennifer more than anything. Of course, that feeling is mutual, and next week, viewers can look forward to a nice romantic reunion between the two.

The promo shows Jack and Jennifer together in Jack’s hotel room. Fortunately, Eve will have signed the divorce papers freeing Jack from his marriage to her, and they’ll have joyfully spent the night together – the first night of the rest of their lives. According to DOOL spoilers, Jennifer will awaken the next morning to find Jack gone, but he’ll soon return with blueberry scones – her favorite.

The promo shows Jennifer breaking open a scone to find an engagement ring, but it won’t be just any engagement ring. Jack will have gone to the Horton house and retrieved the engagement ring that he gave Jennifer years ago, so this will be quite special. Jennifer is shown looking surprised and quite happy as she spots the ring and realizes what’s about to happen. DOOL viewers will have to watch to see exactly how the proposal goes down, but knowing Jack it will be quirky but with a lot of heart.

Next, let’s turn to the second marriage proposal that will happen during the week of October 21-25. The promo shows Justin Kiriakis (Wally Kurth) and Adrienne Johnson (Judi Evans) at dinner enjoying their time together, when Justin whips out a ring box and is clearly trying to propose. Of course, DOOL viewers know these two have been back together for a while now, but it looks like Justin will be itching to make their union official once again.

But there will be a wrinkle with the proposal, as Sonny Kiriakis (Freddie Smith) walks up and totally breaks the mood with an obvious question: “Dad, what are you doing?” Justin then turns and dryly says: “What does it look like I’m doing.” Sonny will probably figure it out soon enough and skedaddle away so that Justin can actually get to his proposal speech.

At any rate, it will be great to see Justin and Adrienne together again, and let’s hope that we’ll see some nice brother/sister scenes between Jack and Adrienne as they’ll each have great news to share. Two engagements in one week is pretty good, so it looks like DOOL viewers are in for a treat!