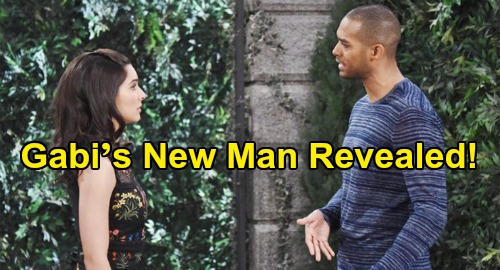 Days of Our Lives (DOOL) spoilers tease that Gabi DiMera (Camila Banus) has some dark moments in her future. Based on all the evidence, it looks like Gabi will face the heartbreaking death of her husband. She surprised herself by falling for Stefan DiMera (Brandon Barash), the man she was trying to destroy.

Neither one of them could fight their feelings in the end, which will make it even more devastating when they’re ripped apart. “Stabi” has been red hot for a while now, so it’s certainly disappointing to lose this duo. You may be even more disappointed when you hear who Gabi will likely be paired with next!

Since we know Gabi and Stefan’s marriage is doomed, it’s time to start thinking about what Gabi’s future will look like without him. Days of Our Lives spoilers reveal that a time jump is coming up on the NBC soap. It seems the show will catapult one year ahead, which should be helpful in some ways.

Gabi has become a fun vixen, so it’d be a shame to watch her wallow in grief for months. DOOL can bypass most of the doom and gloom with this time jump. Of course, Days is mainly doing this for shock value. They’ll get some surprising moments out of it since some couples will suddenly be over and others will suddenly be madly in love – at least it’ll seem that way to viewers.

To the people of Salem, they’ll have been living their lives as usual. There’s a good chance the show will fill in some gaps with fake flashbacks along the way. The twist won’t get everyone’s approval, but at least it’ll serve as something different. Days is genuinely trying to up their game and boost those ratings, so we applaud them for that. We all want to keep the show on the air!

However, there have already been plenty of complaints about Stefan being killed off. It’s a bummer since Gabi and Stefan have been such a sizzling duo. Alas, it appears Gabi’s new man will actually be a former flame – and that pairing wasn’t so sizzling. Word has it Gabi and Eli Grant (Lamon Archey) will be together after the time jump.

This hasn’t been confirmed, but there’s strong buzz and it makes sense considering the current story. Gabi inadvertently left Julie Williams (Susan Seaforth Hayes) to die, which led to some fierce conflict with Lani. Days of Our Lives spoilers say their feud is reigniting. That rivalry may intensify since Lani will face a troubling on-duty incident.

In DOOL’s fall promo, Lani’s in the dark with a gun as Vivian Alamain (Robin Strasser) stands nearby in a hood. Will there be some confusion that results in Stefan getting shot? This incident could be what leads to Stefan’s death and his life-saving heart donation to Julie. That could certainly give Gabi the motivation to steal Lani’s hubby! We all know how she can be when it comes to revenge.

Whatever the case, Lani and Eli’s looming marriage should be destroyed by the time jump. Like it or not, Days appears to be going with Eli and Gabi again. We’ll give you updates as other news emerges. Stay tuned to DOOL and don’t forget to check CDL often for the latest Days of Our Lives spoilers, updates and news.