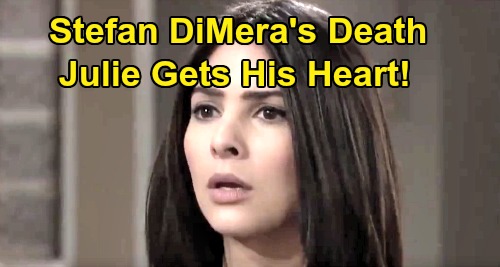 Days of Our Lives (DOOL) spoilers tease that “Stabi’s” whirlwind romance will come to an end. Stefan DiMera (Brandon Barash) and Gabi DiMera’s (Camila Banus) relationship has been twisted, complicated, passionate and fierce! They’re everything you could possibly want in a soap couple, but they’re not meant to last.

Some sites out there have been suggesting that Brandon Barash might not be leaving. However, they’re just messing with viewers’ emotions or perhaps indulging in some wishful thinking. The truth hurts, but fans deserve to know what’s really up. Barash indeed filmed his DOOL exit several months ago.

Of course, that doesn’t rule out a return in the future. Days of Our Lives films nearly eight months in advance, so who knows what writing plans they have and how Stefan might fit in. However, we should point out that Camila Banus has been retweeting fans’ comments like, “please find a way to being BB back! Anyone else will not suffice! We MUST get #Stabi back asap!!”

Banus and Lamon Archey (Eli Grant) also signed a petition calling for Barash’s return to the show. That serves as confirmation that Barash did exit the canvas. No matter what happens down the line, Stefan’s onscreen departure is imminent. Since we know Stefan’s on his way out, how will he leave Salem behind? Unfortunately, the outlook is quite grim.

Julie Williams (Susan Seaforth Hayes) won’t survive unless some unlucky Salemite dies and provides a heart. We can confirm that Julie will indeed pull through thanks to a heart donation. Days of Our Lives spoilers say Kate Roberts (Lauren Koslow) will face a life-or-death situation, but we know she’ll survive, too. There’ll be some scary twists thanks to Vivian Alamain (Robin Strasser), but it’ll all work out for Kate in the end.

Kate obviously needs her heart to stay alive, so she can’t be the one who donates. Stefan makes the most sense considering his exit is coming up. Plus, we know Stefan’s involvement in Vivian’s plot will force Gabi to make a terrible decision. DOOL’s fall promo shows Gabi weeping in despair, so she may make the horrible choice to take Stefan off life support and give his heart to Julie.

It’d be fitting since Julie is Gabi’s adversary and Gabi left her to die. Giving Julie the heart of the man Gabi loves would be unbelievably soapy. There’s also a mysterious on-duty incident looming for Lani Price (Sal Stowers), which could indicate that she’ll shoot Stefan by mistake. The clues just keep piling up.

As more evidence, Banus has been liking tweets about Stefan’s death and what a bad outcome that is. Let’s look at a couple of those. One fan complained, “Didn’t we’re learn anything in the mistake of killing off Will? It’s pointless for me to watch after 40 years when it’s one death after another weekly, I can get that in real life.”

One more viewer said, “I hate what’s coming.. I can only hope that this is a power move by Kristen but she can’t kill her own brother so she switches him out and stashes Stefan away somewhere.” Banus liked another tweet demanding Stefan’s twin brother – another indication that Stefan himself will die.

Banus seems just as desperate to get Barash back on the show as fans are! She appears to be liking tweets that could fix Stefan’s death and get the pairing going again. They’ve been a popular duo for Days, so the show would be crazy not to undo this decision.

Whatever the case, it’s a done deal that Stefan exits. It seems almost as certain that Stefan will end up dead – at least as dead as you can be in Salem! We’ll give you updates as other Days news comes in. Stay tuned to DOOL and don’t forget to check CDL often for the latest Days of Our Lives spoilers, updates and news.