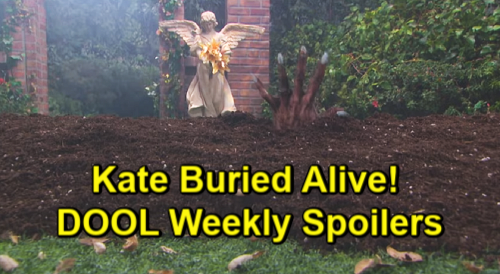 Days of Our Lives (DOOL) spoilers for the week of September 9-13 tease that some crazy moments are coming up in Salem. For starters, Vivian Alamain (Robin Strasser) will dip into her familiar bag of tricks. DOOL fans know Vivian’s been known to bury people alive occasionally, and she’s set to do it once again.

A showdown with Kate Roberts (Lauren Koslow) will result in a dangerous burial. Vivian will make sure Kate’s covered in plenty of dirt and take off. She’ll feel satisfied knowing she got her revenge, but not so fast, Viv! Kate’s a fighter, so she’ll manage to crawl out of this makeshift grave and drag herself to the hospital.

Days spoilers say Eli Grant (Lamon Archey) will also grill Stefan DiMera (Brandon Barash) and Gabi DiMera (Camila Banus) about a shooting. Perhaps Kate will be shot before she’s buried alive, which could leave her in bad shape at the hospital later. Regardless, Vivian will try to finish Kate off, so that may bring a terrible setback.

Sarah Horton Wrestles With What To Tell Eric Brady

Over with Nicole Walker (Arianne Zucker), she’ll be back in Salem and ready for a fierce faceoff. Nicole will definitely want to give Kristen DiMera (Stacy Haiduk) a piece of her mind!

Kristen forced Nicole into a deal for Holly Jonas’ (Harlow and Scarlett Mallory) sake and took over her life. Days of Our Lives spoilers say Nicole will be furious over all the chaos Kristen caused, so expect a major outburst.

Meanwhile, Sarah Horton (Linsey Godfrey) will wrestle with a big decision. She won’t be sure she should tell Eric Brady (Greg Vaughan) she’s pregnant. As Sarah mulls that over, temptation will strike for Brady Black (Eric Martsolf). Thanks to all the Kristen and Nicole drama, Brady may consider taking a drink.

Eve Donovan Determined To Get Revenge On Jack Deveraux

Other Days of Our Lives spoilers say Xander Cook (Paul Telfer) will put some clues together. It won’t take him long to realize Sarah’s pregnant, so he’ll let her know he’s aware of her secret. That could bring Xander’s offer to pose as the “baby daddy.”

Finally, Eve Donovan (Kassie DePaiva) will be on a vengeful mission. She’ll be determined to blow up Jack Deveraux’s (Matthew Ashford) world and leave him miserable. Jack and Jennifer Horton (Melissa Reeves) are hoping to get Jack’s memories back, but a crushing blow is brewing. Eve just might have a hand in that!

The good news is Jack’s memories will still return eventually. The bad news is there’ll be another delay and more work to reach that point. We’ll give you updates as other Days details emerge. Stay tuned to DOOL and don’t forget to check CDL often for the latest Days of Our Lives spoilers, updates and news.