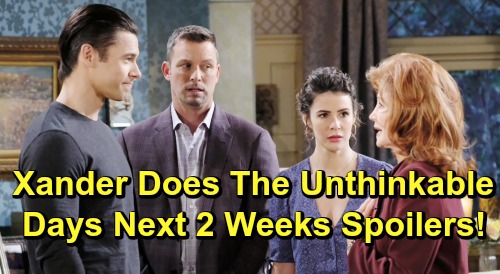 Days of Our Lives (DOOL) spoilers for the next two weeks tease that some tough situations are on the way. During the week of June 10-14, Will Horton’s (Chandler Massey) health will continue to decline. However, he won’t let that stop him from making the most of the time he has left. Will will ask Sonny Kiriakis (Freddie Smith) to marry him and make memories while he still can.

Elsewhere, Kate Roberts (Lauren Koslow) and Dr. Marlena Evans (Deidre Hall) will bond over their sorrow. They’ll hate what Will’s going through and desperately wish they could turn things around for him. Marlena and Kate can’t do that, but Xander Cook (Paul Telfer) can and will thanks to Dr. Sarah Horton (Linsey Godfrey). He’ll swoop in and play the hero with the diary to impress her.

Xander will still face some suspicions, but he’ll handle them and keep making moves on Sarah. He’s becoming more smitten with her, so we’ll see how long it takes Sarah to warm up to him.

Meanwhile, Ben Weston (Robert Scott Wilson) will be placed under arrest after he’s caught with the lighter. It’ll be a misunderstanding, but Eve Deveraux (Kassie DePaiva) will use it as an opportunity to lock Ben up.

Luckily, DOOL spoilers reveal that Ciara Brady (Victoria Konefal) will have other plans. She’ll plot with Ben briefly before she shifts gears and seeks Tripp Dalton’s (Lucas Adams). Tripp will be arrested over the Haley Chen (Thia Megia) drama, but it seems he’ll wiggle out of trouble or get out on bail. Whatever the case, the week of June 17-21 will bring Ciara’s shocking updates and a sneaky plan.

Days spoilers say Tripp will be appalled when he learns Claire Brady (Olivia Rose Keegan) set two cabin fires and tried to kill three people. Ciara nearly died in the first one and Tripp could’ve died along with Haley in the second. As part of Claire’s takedown, Tripp and Ciara will decide to pretend they’ve reunited. They’ll think they’ll infuriate Claire into making a mistake.

Other Days of Our Lives spoilers say Will will be happy to see Sami Brady (Alison Sweeney) and Lucas Horton (Bryan Dattilo). It looks like they’ll arrive just in time for Will and Sonny’s wedding. Soon after, the news of Caroline Brady’s (Peggy McCay) death will spread across Salem. It’ll lead to more returns and surprises as Caroline is remembered.

Over with Maggie Kiriakis (Suzanne Rogers), Days of Our Lives spoilers state that she’ll catch Xander in a lie. That could cause a setback in their awkward friendship that was almost starting to form.

Later, Kristen DiMera (Stacy Haiduk) will push Xander to take care of something. She’ll want Ted Laurent (Gilles Marini) to vanish after a surprising betrayal, so Xander will happily make him disappear.

It sounds like fantastic episodes are ahead on the NBC soap. We’ll keep you posted as other Days details emerge. Stay tuned to DOOL and don’t forget to check CDL often for the latest Days of Our Lives spoilers, updates and news.