BY hellodrdavis on December 8, 2019 | Comments: one comment
Related : Days of Our Lives, Soap Opera, Spoiler, Television 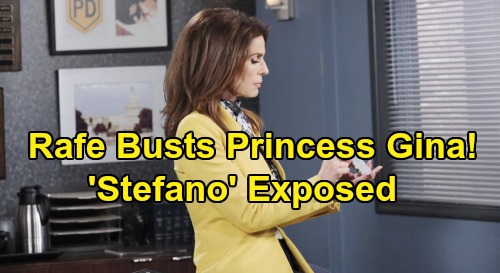 Days of Our Lives (DOOL) spoilers tease that Rafe Hernandez (Galen Gering) will soon make a huge discovery. As DOOL viewers know, he and Hope Brady (Kristian Alfonso) have been divorced for well over a year now, when you factor in the time jump. But the two still maintain a working relationship, since Hope is now police commissioner once again.

Of course, Hope isn’t really Hope anymore; she’s Princess Gina Von Amberg (Kristian Alfonso), and lately Rafe has noticed that she hasn’t really seemed into her job. But now that Abigail DiMera (Kate Mansi) has become interested in looking over the evidence related to her mother’s fall from the bistro balcony last year, Princess Gina has suddenly become very concerned about keeping Abigail away from that evidence.

As DOOL viewers know, Abigail recently asked “Hope” to review all the evidence that supposedly points to Eve Donovan (Kassie DePaiva) being Jennifer Deveraux’s (Melissa Reeves) assailant. Princess Gina balked at that request, and Rafe wondered why. And DOOL spoilers indicate that Rafe may soon get closer to the case, perhaps getting involved in Abigail’s investigation, since he’ll soon attempt to hunt down Dr. Wilhelm Rolf (William Utay).

Exactly what gets Rafe after Rolf remains to be seen, but it’s likely that it will have to do with Jennifer’s returning memories about the night she was pushed off the balcony. Days spoilers say that Abigail will take Jennifer to the scene of the crime, and she’ll remember something, but it doesn’t look like she’ll remember everything that happened. Perhaps she’ll remember the part about accessing (or wanting to access) Rolf’s flash drive.

If she does, then that would certainly be something that might lead Rafe to try to hunt down Rolf. But Rafe’s going to have no idea what he’s about to stumble onto when he trails Rolf. According to Days of Our Lives spoilers, Princess Gina’s going to be stunned when Rafe finds her…in the secret lair. Of course, this is the place where Princess Gina has been spending much of her free time, painting, and hanging out with “Stefano DiMera,” whose memories and personality have been implanted into Steve Johnson’s (Stephen Nichols) brain.

And since Days of Our Lives spoilers say that Princess Gina will be in the hot seat, it looks like Rafe will end up confronting her, so she’ll need to come up with a reason for her secret hideout, and quickly. Plus, she’ll likely need to get rid of nosey Rafe before he bumps into Stefano, whom he’d quickly recognize as Steve. And then there’s the possibility that Rafe will see the portrait of Steve as Stefano, which would be a disaster for Princess Gina.

We’ll see how it all turns out, and we should also note that shortly after all this goes down, DOOL spoilers say that Stefano will get a surprise visitor – whether that turns out to also be Rafe remains to be seen, but knowing Princess Gina, she might just be successful in getting rid of Rafe before he bumps into Stefano. Still, she’ll then have a real problem since Rafe will know about the lair, where Stefano has been hiding in plain sight.

Do you think that Princess Gina will succeed getting rid of Rafe and keeping Stefano’s existence a secret? Stay tuned to DOOL and don’t forget to check CDL often for the latest Days of Our Lives spoilers, updates, and news.