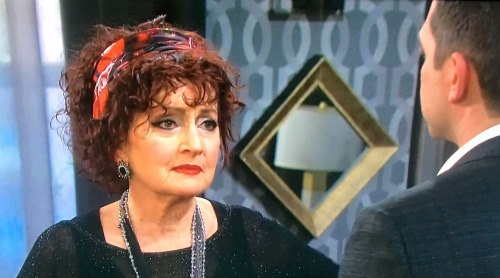 Days of Our Lives (DOOL) spoilers reveal that one NBC soap star’s speaking out on her status. DOOL fans know Robin Strasser took over the role of Vivian Alamain during her recent stint. Louise Sorel wasn’t given enough advance notice, so she had to pass on returning to Salem. However, Strasser gladly stepped up and put her own spin on Vivian – which received some mixed reviews.

Some viewers loved Strasser’s quirky take on the role. She certainly brought a special flamboyance that felt right at home on campy Days of Our Lives. Other fans couldn’t help but miss Sorel’s version of Vivian. Strasser was fun, but Sorel is just classic Viv. No one else is going to really feel like the character, no matter who they recast with.

Strasser already wrapped her latest Salem stint, but will she return? It doesn’t look like it according to a recent tweet from the actress. Days of Our Lives spoilers suggest Brandon Barash (Stefan DiMera) is making a comeback in some form. Reliable insiders promise it’s happening, so it seems Strasser wanted to let viewers know about her status, too.

First, Strasser shared a story about running into Frank Valentini, General Hospital’s executive producer. Valentini told Strasser he’d heard about her stint at Days and admitted he’d stayed close to Ron Carlivati, DOOL’s current head writer and GH’s former head writer. Strasser then confessed she’d done something to get on Carlivati’s bad side and was thankful he’d forgiven her.

Strasser tweeted, “I said ‘I’m grateful Ron forgave me’ ‘Forgave you for what?’ Well-if that drop-dead handsome man doesn’t remember-then neither do I-We’re all good:)” It appears we’ll all just have to wonder what happened along with Valentini! Strasser definitely has a great sense of humor and an eccentric style of tweeting.

That story led to Strasser shutting down a return possibility. “btw #DAYS won’t be using me as #Vivian again-#CordayHasABetterWay & I’m so OK,” Strasser said. Does that mean someone else will be portraying Vivian? It’d be awesome to see Sorel back in the role, but Strasser could mean they’re using another recast. Then again, they may not plan to bring Vivian back at all.

Of course, it’d be nice for Stefan to reunite with his mother – IF Barash is playing Stefan. He could be returning as a lookalike, but we’re still betting on the real deal. It just makes the most sense considering so many fans are clamoring for Stefan.

Regardless, Strasser doesn’t expect to be in Salem again. Fortunately, Days of Our Lives spoilers say there’s plenty more drama ahead with or without Vivian, so don’t miss all the action. We’ll give you updates as other news comes in. Stay tuned to DOOL and don’t forget to check CDL often for the latest Days of Our Lives spoilers, updates and news.

Ask me when I last saw @FrankValentini? never mind I’ll tell you: FIVE WEEKS AGO on #LexingtonAve in #NYC I hadn’t seen him since fateful 2011:( “FRANK! what are you doing on #theUpperEastside in NY!?” “I just saw my Eye Doctor”
OK-I told him I was doing #DAYS He said he knew…

becuz he’s stayed close to @carlivatiron Really OK! I said “I’m grateful Ron forgave me” “Forgave you for what?” Well-if that drop-dead handsome man doesn’t remember-then neither do I-We’re all good:) btw #DAYS won’t be using me as #Vivian again-#CordayHasABetterWay & I’m so OK:)