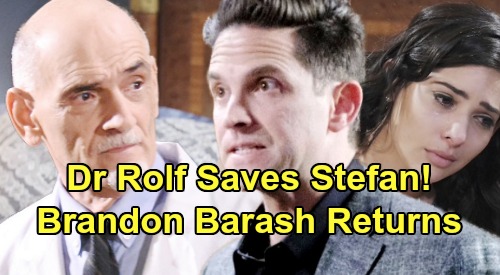 Days of Our Lives (DOOL) spoilers reveal that Dr. Wilhelm Rolf (William Utay) seemingly lied to Gabi DiMera (Camila Banus). DOOL viewers know Gabi begged Dr. Rolf to bring Stefan DiMera (Brandon Barash) back from the dead. He brings practically everyone else back, so why not? However, Dr. Rolf insisted he could only bring people back from the BRINK of death, which doesn’t appear to be true.

After EJ DiMera’s (James Scott) heartbreaking demise, Sami DiMera (Alison Sweeney) sobbed over his body in the morgue. Later, Kristen DiMera (Stacy Haiduk) slipped in and injected a dose of something mysterious. That’s how this whole string of serum comebacks got started.

Last time we checked, someone who’s cold in a morgue is also brain dead – just like Stefan was. If anything, Stefan should’ve been easier to save because he was still breathing and had a beating heart. No matter how Days tries to spin EJ’s death and others through rewrites, it doesn’t line up with what was onscreen. Dr. Rolf’s story about not being able to save Stefan just doesn’t fly.

Luckily, this is also something Days of Our Lives could use to their advantage. There’s been speculation about Brandon Barash’s return to the show, and we’ve got some positive updates to pass along. Although there’s still no official confirmation, extremely reliable insiders insist Barash is indeed back. Basically, it’s a done deal and you can rest easy if you’re a Barash fan.

There’s no official word on whether Barash will reprise his role as Stefan or play a lookalike. It’s possible Barash will portray a long-lost twin of Stefan’s or possibly a random doppelganger. It seems more likely the real Stefan will be back though. They could claim Dr. Rolf gave Gabi a bogus story and secretly saved Stefan for his own devious plan.

The heart given to Julie Williams (Susan Seaworth Hayes) may be coming from a doppelganger. That’s no more farfetched than Days bringing Barash back as a lookalike later, so they might as well use it this way instead. Plus, we’ve got the built-in amnesia storyline that tends to come with these returns from the dead. It’d be simple to explain why Stefan’s been away.

“Stabi” fans certainly want the real deal! It would mean Stefan’s love story with Gabi could pick back up. Bottom line, there are some great reasons why the real Stefan is likely returning, but it’s pretty much guaranteed that Brandon Barash will return in some form.