Days of Our Lives Spoilers: Rolf and Chad In Contact With Stefano DiMera – Is DOOL Considering Recasting The Phoenix? 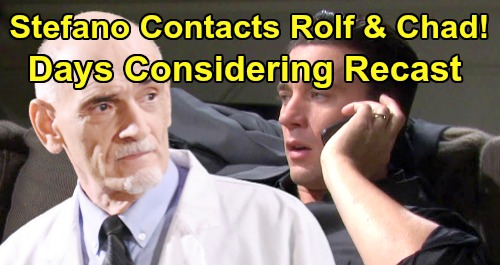 Days of Our Lives (DOOL) spoilers tease that Stefano DiMera’s (Joseph Mascolo) name has come up quite a bit lately on the NBC soap. As DOOL viewers know, Dr. Wilhelm Rolf (William Utay) has unraveled a plan to bring Princess Gina Von Amberg (Kristian Alfonso) back into existence. He secretly implanted a microchip into Hope Brady’s (Kristian Alfonso) neck to bring the “essence” of Princess Gina back and to eradicate Hope’s personality from existence.

Of course, Rolf doesn’t care for Hope because she shot and allegedly killed Stefano back in 2016, as she was grief-stricken over Bo Brady’s (Peter Reckell) death and believed Stefano was responsible for it. And for a while, it seemed that Rolf was working to avenge Stefano’s death by turning Hope into Princess Gina, but recent events and DOOL spoilers indicate that Rolf may not be trying to avenge Stefano’s death at all…because Stefano may not be dead.

Rolf has been shown on the phone with some secret partner, seemingly giving that person updates about what he’s doing with Hope/Princess Gina. Of course, Rolf was working for Kristen DiMera (Stacy Haiduk) for a while back when she seemed to be running the operation at the Nashville warehouse where all of Rolf’s back-from-the-dead patients were housed. But it doesn’t seem that she’s the one he’s been talking to by phone, and that leads us to wonder whether it could be Stefano himself that Rolf’s been talking to.

DOOL viewers will remember that back when Nicole Walker (Arianne Zucker) was trapped in the Nashville warehouse, she saw a series of doors with patient initials on them – and one of them was clearly labeled “SD,” which indicated at that time that Stefano may be alive and was brought back from the dead by Rolf, in typical fashion for The Phoenix. Of course, it might also have meant that Stefano was still healing and might have been in questionable shape.

And then there’s the DOOL spoilers indicting that Chad DiMera (Billy Flynn) will confess to Abigail DiMera (Kate Mansi) that he’s been in contact with Stefano after the time jump. All of these factors indicate that Stefano could be out there and could become a factor on the show again, and that leads us to wonder whether DOOL would ever recast the role of Stefano.

DOOL buzz indicates that the show may be considering a controversial recast, and a Stefano recast would certainly fit that bill. It would be tough for a lot of viewers to accept anyone other than Joseph Mascolo in the role of Stefano, but the fact remains that if the show’s going to continue on with a Stefano story, then a recast is necessary, since Joseph Mascolo passed away back in 2016.

Of course, another option is for Stefano to simply be an off-screen presence, but that would be pretty tricky to pull off. It seems that if the show is going to go in the direction of Stefano actually having contact with on-screen characters going forward, then they’d necessarily need to recast the role. It’s an interesting possibility for viewers.

What do you think? Would you accept a Stefano recast if the show goes in that direction? Stay tuned to DOOL and don’t forget to check CDL often for the latest Days of Our Lives spoilers, updates, and news.