BY hellodrdavis on September 7, 2019 | Comments: one comment
Related : Days of Our Lives, Soap Opera, Spoiler, Television 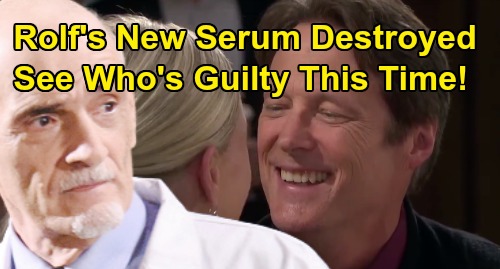 Days of Our Lives (DOOL) spoilers tease that Jack Deveraux (Matthew Ashford) and Jennifer Horton (Melissa Reeves) will soon gear up for a big event. As DOOL viewers know, Dr. Wilhelm Rolf (William Utay) is back on the scene, and that’s got Jack and Jen’s hopes up. They want Dr. Rolf to recreate the memory-retrieval serum that worked to restore Will Horton’s (Chandler Massey) and Vivian Alamain’s (Robin Strasser) memories, and he’s agreed to do so, along with some assurances from Jack about how his lab will be run.

Well, it looks like things will go according to plan and Jack will get the lab up and going for Dr. Rolf. It will be an exciting prospect for Jack and Jen – after all, they’ve had their hopes up before, only to have them shattered by the likes of Eve Donovan (Kassie DePaiva). As DOOL viewers will remember, Eve not only burned Rolf’s diary that contained the formula for the memory-retrieval serum, but she intentionally destroyed the batch of serum that Jack initially had created.

Eve is still incredibly bitter that Jack wants to get his memory back. She wanted Jack to stay married to her without worrying about his old memories. From Eve’s perspective, Jack wanting to get his memory back is paramount to wanting to get back together with Jen. Eve knows that once Jack’s memories come back, he’ll surely reunite with Jen and his family, and she doesn’t want that to happen under any circumstances.

Well, Jack and Jen will think that they’ve finally broken free from Eve’s wrath by going around her and going straight to the source – Dr. Rolf – for the serum. But unfortunately, things won’t go so smoothly. Yes, Dr. Rolf will get his lab up and going, and he’ll actually be able to recreate the serum for Jack. That’ll be great news, but once again tragedy will occur. Jack and Jen will soon learn that someone has trashed Dr. Rolf’s lab…and destroyed the completed serum in the process!

And that will lead to a major investigation into exactly who trashed the lab. It probably won’t come as a surprise that Jack and Jen will immediately suspect that Eve is behind the whole thing. And why wouldn’t they suspect Eve? She’s done everything in her power in the past to squash any attempt that Jack made to get his memory back, so she’s a natural suspect. According to DOOL spoilers, Jack will even confront Eve and accuse her of the deed.

But will the culprit really be Eve? Sure, Eve holds a grudge, but it almost seems too obvious that the lab trasher would be her. After all, she seems to be content with going after Jack via her wrongful termination lawsuit. So, who else might the culprit be? Well, we can’t help but think that it could be someone else who has been wronged by either Jack or Jen (or both), and there is someone else who comes to mind.

According to DOOL spoilers, Dr. Henry Shah (Piter Marek) will be back on canvas. Remember that Dr. Shah (who was previously portrayed by Andre Khabbazi) has been interested in Jen for quite a while now, and recently Jen arranged a date with him and got his hopes up but then again crushed him when she was distracted on their date by Jack and his memory woes. Dr. Shah wasn’t too happy with Jen about that, and he strongly expressed his frustration with her preoccupation with Jack.

Might Dr. Shah be the person who ultimately trashes the lab? DOOL viewers will have to wait to see, but it would certainly be an interesting development if someone from Jen’s side of the fence was responsible for the whole thing. Jealousy and frustration certainly can be powerful motivators, so maybe we’ll see Dr. Shah go berserk and trash the lab over Jen!

Who do you think will end up trashing Dr. Rolf’s lab and sabotaging Jack’s chance to get his memories back? Stay tuned to DOOL and don’t forget to check CDL often for the latest Days of Our Lives spoilers, updates, and news