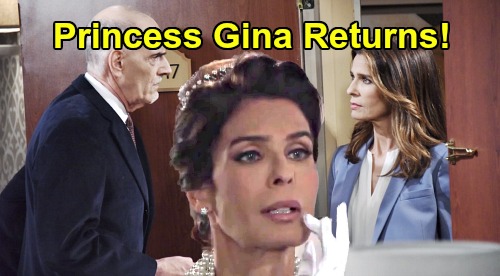 Days of Our Lives (DOOL) spoilers tease that Hope Brady (Kristian Alfonso) will soon be the target of another of Dr. Wilhelm Rolf’s (William Utay) devious plans. Rolf isn’t all bad – after all, he’s been responsible for bringing a lot of Salem residents back from the dead, much to fans’ delight. But he’s also got some fuzzy ethical boundaries, and he doesn’t seem to mind using human subjects as his personal guinea pigs.

Of course, we can’t forget that he’s previously administered doses of his back-from-the-dead serum to patients without knowing what all the side-effects will be. EJ DiMera (James Scott) is a prime example; he wound up in terrible shape after getting Rolf’s serum. Plus, Will Horton (Chandler Massey) and Jack Deveraux (Matthew Ashford) wound up with retrograde amnesia from the whole thing. One never knows what Rolf’s experimentations will lead to, it seems.

Well, now it seems that Rolf will turn his attention to Hope. Recently, DOOL viewers saw Rolf bow to Hope as if she were Princess Gina (Kristian Alfonso), which really creeped her out. And according to Days of Our Lives spoilers, Rolf will take an interest in Hope and even subject her to some experimentation. That doesn’t sound good, and it looks like Hope is in for quite an ordeal.

According to DOOL spoilers, Rolf will actually go so far as to inject Hope with something from a syringe. He’ll corner her, inject her, then later it looks like Eli Grant (Lamon Archey) will find her asleep on a pew in the hospital chapel. It appears that viewers won’t immediately be aware of what’s happened to Hope in the interim, but clearly Rolf’s got something up his sleeve, and it most likely has to do with invoking Princess Gina again.

As viewers will remember, the DOOL fall preview showed Hope dressed up looking very much like Princess Gina again and looking into a mirror. This is in addition to DOOL spoilers indicating that Marlena Evans (Deidre Hall) and John Black (Drake Hogestyn) will soon notice that Hope doesn’t seem like herself, and they’ll be concerned about their good friend. The “not seeming like herself” part doesn’t sound good – could Rolf be trying to get Hope to once again become Princess Gina?

Time will tell, but it looks like Rolf is going to keep working on Hope going forward. We’ll see if he has any more injections to give her, or if he manipulates her in other ways, but something tells us that he’ll become his pet project, especially after Kayla Johnson (Mary Beth Evans) sees to it that he loses his lab at University Hospital.

Do you think we’ll see a return of Hope as Princess Gina soon? Stay tuned to DOOL and don’t forget to check CDL often for the latest Days of Our Lives spoilers, updates, and news.