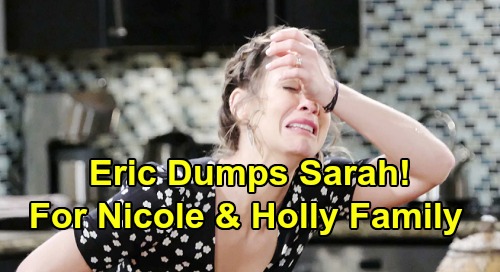 Days of Our Lives (DOOL) spoilers tease that Sarah Horton (Linsey Godfrey) is headed for heartbreak. She only has herself to blame since Eric Brady (Greg Vaughan) is clearly hung up on Nicole Walker (Arianne Zucker). Nicole is the love of Eric’s life, so this flash-in-the-pan romance with Sarah just can’t compete.

Eric was naturally upset about Brady Black’s (Eric Martsolf) reunion with “Nicole” aka Kristen DiMera (Stacy Haiduk). There’s been a lot for Eric to process since “Nicole” turned against him. He had to deal with losing Holly Jonas (Harlow and Scarlett Mallory) and “Nicole” as well as her sham marriage to Tony DiMera (Thaao Penghlis). Hearing that Brady and “Nicole” had reconnected pushed Eric over the edge.

Of course, Sarah is insecure in this relationship. That’s an excellent reason NOT to dive right in, but she did it anyway. Sarah whined about how she gave up her marriage to Rex Brady (Kyle Lowder) for Eric, which was a pretty unfair jab. Eric didn’t ask Sarah to do that!

Furthermore, there was no point in making Rex and DOOL fans endure that lackluster marriage. Rex made plenty of mistakes, but he deserved the chance to move on if Sarah wasn’t invested. Days of Our Lives spoilers say Sarah will be forced to move on, too.

On August 28, Eric will drop a Nicole bomb on Sarah. We should note that “Nicole” will be exposed as Kristen later this week, and Sarah will be there to witness it. That tells us Eric will be dropping a separate Nicole bomb – most likely one about the real Nicole being alive. It looks like Kristen will agree to reveal Nicole and Holly’s location if all charges are dropped.

Days spoilers say Eric will hate the thought of giving up on justice, but Holly and Nicole are more important. He’ll practically beg Jack Deveraux (Matthew Ashford) to go for this deal. Jennifer Horton (Melissa Reeves) should agree that freeing two captives and bringing them home is what matters.

Will Eric Brady Decide To Follow His Heart To Nicole Walker?

Later, Eric will meet back up with Sarah to discuss where things stand between them. They’ll decide to get honest, which is for the best. They need to accept where they’re at and try to figure out what’s next.

Once Eric knows the real Nicole is alive and available, he may insist he has to follow his heart. Nicole is his soul mate, so he’ll probably just hope Sarah will understand. There’s a good chance Sarah will indeed get it, even if she doesn’t like it. Sarah shouldn’t keep chasing after man who’s in love with someone else. She’s been a placeholder, but what she needs is someone who adores her and only her.

Xander Cook (Paul Telfer) is ready and waiting, so let’s hope “Xarah” is just around the corner! As for Eric, Days of Our Lives spoilers say he’ll head to Chicago with Jennifer and Jack. Whether they find Holly and Nicole there or not, they should at least find something that’ll put them a step closer. Eric, Nicole and Holly should hopefully be a family soon enough.

Are you eager to get off this Sarah-Eric merry-go-round? Should Eric be with Nicole while Sarah cozies up to Xander? We’ll give you updates as other Days news comes in. Stay tuned to DOOL and don’t forget to check CDL often for the latest Days of Our Lives spoilers, updates and news.