BY hellodrdavis on October 30, 2019 | Comments: one comment
Related : Days of Our Lives, Soap Opera, Spoiler, Television 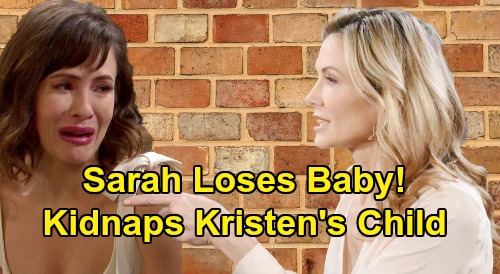 Days of Our Lives (DOOL) spoilers tease that some big drama is brewing for after the big DOOL time jump. As CDL has reported, DOOL spoilers say that Eric Brady (Greg Vaughan) will learn about Sarah Horton’s (Linsey Godfrey) pregnancy right before the time jump takes place. Kristen DiMera (Stacy Haiduk) will drop the bomb on Eric, who will absolutely reel from the news. This should make for some dramatic scenes heading into the time jump, with a lot to be explained later.

But we’re now hearing more about what’s in store for after the time jump. According to DOOL spoilers, there will be a very dramatic twist in the story of Sarah’s and Kristen’s pregnancies. Sadly, Days of Our Lives spoilers indicate that Sarah’s baby will not survive. Now, whether she’ll lose the baby before or after he or she is born remains to be seen. But either way, it seems that the loss will have a profound effect on Sarah, which probably indicates that the baby will die either shortly before or after birth.

At any rate, Sarah will end up suffering a huge psychological trauma, and that she’ll lose it and kidnap Kristen’s baby! This is huge twist, since it certainly seems that Kristen would have been the most likely to lose her baby, given her high-risk pregnancy.

It also seems that Kristen would have be the most likely of the two women to kidnap the other’s child, but Days buzz indicates that Sarah will be in a very bad way after her baby dies, and that she won’t be thinking clearly at all. This may be one of those situations where, in her grief, she mistakenly thinks Kristen’s baby is hers.

At any rate, Sarah will apparently take Kristen’s child and head abroad, ending up in Paris. And that will lead to a big search for Sarah and the baby. As you can imagine, Brady Black (Eric Martsolf) will probably be beside himself with worry over his baby, and ultimately Brady, Kristen, Xander Kiriakis (Paul Telfer) and Eric will head to Paris to track down Sarah and the baby. It should lead to a big search and rescue mission for the quad.

Interestingly, we should note that this Days of Our Lives spoiler does not mention Nicole Walker (Arianne Zucker) at all, and that she’s not described as a member of the search party that goes to Paris. Does this mean that she and Eric won’t be together after the time jump?

It’s always possible that the secret she was keeping from Eric about Sarah being pregnant ultimately tore them apart. But it’s also likely that she and Eric are still together and that she stays home to watch Holly Jonas (Harlow and Scarlett Mallory) while Eric and the rest head to Paris.

At any rate, these are big developments, as Sarah losing it and kidnapping another woman’s baby is a major departure from what viewers would have expected. We should note that it’s still unclear just how far into the time jump we’ll see all of this occur. Some of the story could be told through flashbacks after the time jump takes place, or it could all start taking place “live” once the time jump occurs.

What do you think? Are you surprised that Sarah will perpetrate a kidnapping after losing her baby? Stay tuned to DOOL and don’t forget to check CDL often for the latest Days of Our Lives spoilers, updates, and news.