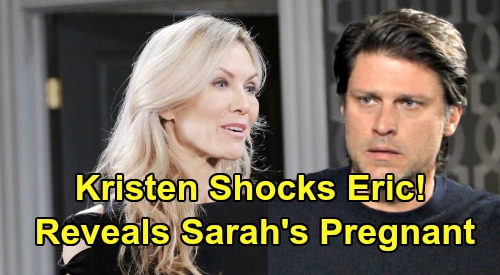 Days of Our Lives (DOOL) spoilers tease that Eric Brady (Greg Vaughan) will get a big shock. As DOOL viewers know, he’s been happily canoodling with his true love Nicole Walker (Arianne Zucker). Their reunion has been wonderful for them both, and they’re enjoying their time together with Holly Jonas (Harlow and Scarlett Mallory). But DOOL viewers know that Eric is completely in the dark about Sarah Horton’s (Linsey Godfrey) pregnancy, and that Sarah plans to leave town so that he never knows about his baby.

Sarah doesn’t want Eric to feel like he’s obligated to her, and she doesn’t want to ruin his reunion with Nicole, so she just plans to go away quietly and raise her son or daughter alone. It seems a bit unbelievable that Sarah thinks that Eric won’t ever find out about the baby, especially since Maggie Horton (Suzanne Rogers) and others would necessarily have to know about the situation, but still Sarah seems determined to leave Salem.

Plus, Sarah’s got Xander Kiriakis’ (Paul Telfer) help. He knows about the baby, and he’s resolved to help Sarah get out of Salem, even though he’s secretly looking for ways to keep her around without spilling the beans to Eric himself. Of course, Xander knows that this would be a sure-fire way to keep Sarah around Salem, but it would also totally alienate him from her, which he doesn’t want. Xander really wants a future with Sarah, so he doesn’t want to blow it by betraying her trust.

Days of Our Lives spoilers say that Sarah’s pregnancy is going to be revealed to Eric, but it will be from an unlikely source. DOOL viewers will remember that Nicole recently found out about Sarah’s pregnancy from Dr. Wilhelm Rolf (William Utay), but she seems to have decided to keep the information to herself, since she’s afraid that Eric might go back to Sarah if he finds out. But it won’t be Nicole who ultimately tells Eric the truth.

Rather, it will be Kristen DiMera (Stacy Haiduk) who will drop the bomb on Eric about Sarah’s pregnancy. And according to DOOL spoilers, this will happen on Friday, November 8, which is also the day of the big DOOL time jump. So it seems that Eric finding out about Sarah’s pregnancy will not only likely be a Friday cliffhanger, it will be a time jump cliffhanger as well.

Days viewers will get to pick up with the action on Monday, November 11 with the show moving a year in advance. It will be interesting to see what a year after the big pregnancy reveal will bring. The baby will have been born in that year, but will Eric still be with Nicole at that point? Or will Nicole’s fears have come true and Eric went back to Sarah? Of course, its always possible that neither of those options come to fruition and Eric isn’t romantically involved with either woman.

What do you think will happen once Eric learns of Sarah’s pregnancy? Stay tuned to DOOL and don’t forget to check CDL often for the latest Days of Our Lives spoilers, updates, and news.