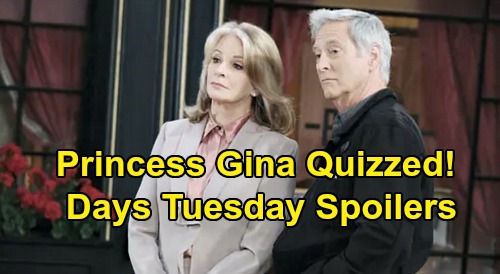 Days of Our Lives (DOOL) spoilers for Tuesday, October 29, tease that Rafe Hernandez (Galen Gering) will fear the worst. He wanted to believe Jordan Ridgeway (Chrishell Hartley) had truly turned things around, but his latest test results will leave him with doubts. Rafe just found out he was poisoned, and that cupcake was pretty much the only thing he had to eat. Throw in Jordan’s strange behavior and Rafe has every reason to be suspicious right now.

JJ Deveraux (Casey Moss) should be awfully suspicious as well. He thought it was a stretch when Jordan’s mind immediately went to poisoning, so Rafe’s results are sure to leave him concerned. Days of Our Lives spoilers say Rafe and JJ will mull over Jordan’s guilt on Tuesday. They’ll realize they need some proof, so Rafe will encourage JJ to dig around for him.

Unfortunately, Jordan’s prepared to take down anyone who gets in her way. Days of Our Lives spoilers say JJ’s investigation will land him in danger. He’ll be attacked by an unhinged Jordan, so this DOOL storyline’s really heating up!

Meanwhile, Ben Weston (Robert Scott Wilson) will assure Ciara Brady (Victoria Konefal) of his innocence. She just found the poison vial, so she’ll wonder what it is and why Ben has it. Once Ben gets brought in the loop, he’ll promise he’s never seen that vial before. It won’t be long until they suspect Jordan’s trying to frame Ben, so he’ll take the vial to the lab and hope to prove she’s still insane.

Back with Ciara, she’ll be unnerved when Jordan shows up for a chat. Days spoilers say Jordan will have a pitch to make, so Tuesday’s episode should set that up. Across town, Jennifer Horton (Melissa Reeves) and Jack Deveraux (Matthew Ashford) will enjoy another romantic evening. Too bad a tense encounter with Dr. Wilhelm Rolf (William Utay) will derail it! Dr. Rolf will still be harping on Jenn about that flash drive, so expect quite an outburst.

Finally, John Black (Drake Hogestyn) and Marlena Evans (Deidre Hall) will interrogate “Hope Brady” (Kristian Alfonso). Of course, Hope’s certainly not herself at the moment. She’s transformed into Princess Gina, so this grilling session should leave “Jarlena” even more baffled.

It sounds like some great drama’s ahead in Salem. We’ll give you updates as other Days news comes in. Stay tuned to DOOL and don’t forget to check CDL often for the latest Days of Our Lives spoilers, updates and news.