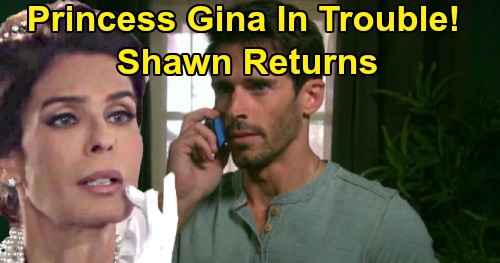 Days of Our Lives (DOOL) spoilers tease that Rafe Hernandez (Galen Gering) will remain perplexed by “Hope Brady” aka Princess Gina Von Amberg (Kristian Alfonso) and her bizarre behavior. DOOL fans know Rafe was married to Hope at one time and shared a strong bond with her. Despite Princess Gina’s impressive imitation, Rafe’s definitely had moments where things just don’t add up. He can tell that “Hope” isn’t acting like herself lately.

Abigail DiMera (Kate Mansi) was also suspicious of “Hope,” but she probably won’t be as involved now that Jennifer Deveraux’s (Melissa Reeves) mystery has seemingly been wrapped up. Thanks to Stefano DiMera aka Steve Johnson (Stephen Nichols), the second round of doctored footage pointed to Dr. Wilhelm Rolf (William Utay) as the culprit. Abigail now believes Dr. Rolf pushed Jennifer, so Princess Gina thinks she’s dodged a bullet.

However, Days spoilers say another bullet could come speeding toward Princess Gina soon enough. That’s because Shawn Brady (Brandon Beemer) is headed back to Salem – and he’ll have a few things working in his favor. For starters, Hope is Shawn’s mother. He knows her awfully well by now, so he should immediately pick up on the fact that something’s off.

Furthermore, Shawn has the benefit of distance. Everyone else in Salem has become used to Princess Gina’s “close but not quite” version of Hope. It’ll be easier for Shawn to spot the differences right off the bat. That’s especially true since Shawn also has a history with Princess Gina. The wheels may start turning for Shawn if Princess Gina slips up – and she surely will since she has before!

Days of Our Lives spoilers say Rafe will be the one who summons Shawn back to Salem. Since Rafe just won’t know if he’s seeing things clearly anymore, he’ll feel like he needs some backup. Rafe will view Shawn as the ideal person to help him on this. Between Shawn’s knowledge of Princess Gina and his connection to Hope, he could indeed help crack this case.