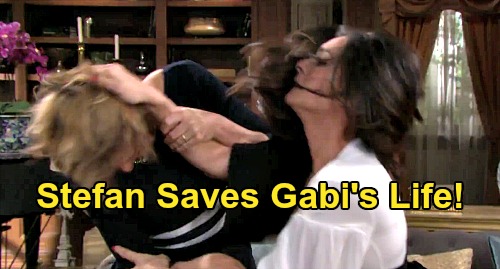 Days of Our Lives (DOOL) spoilers tease that Stefan DiMera (Brandon Barash) will take action after Gabi DiMera’s (Camila Banus) run-in with a fierce foe. “Nicole DiMera” (Arianne Zucker) aka Kristen DiMera (Stacy Haiduk) will lash out thanks to Gabi’s button-pushing. The result will be a vicious DOOL showdown, which will seemingly tip Gabi off to the mask “Nicole” is wearing.

It looks like Gabi will reach up and try to peel it back, but Kristen will fight to protect her identity. Stefan will join in this fight and do his best to save his wife. Gabi burned Stefan by taking everything and throwing him out of the mansion, but he knows she loves him deep down. Likewise, Stefan has lingering feelings for Gabi as well. He’ll be forced to confront those during the week of August 19-23.

After Kristen knocks Gabi and Stefan out, it appears they’ll be held hostage together. Gabi will connect any remaining dots and realize Kristen has been posing as Nicole. However, there’ll be something else Gabi wants to address. Days of Our Lives spoilers say Gabi will wonder why Stefan came to her rescue. She’ll suspect Kristen might’ve killed her without Stefan’s intervention, so she’ll view him as a hero.

Even so, Gabi won’t get why Stefan would bother. He warned that Gabi had no control over him now, but he still feels he has control over her. Stefan made it clear that he’d exploit the situation. Is this Stefan’s attempt at doing that or just a man trying to protect the woman he loves? It seems that’s exactly what Gabi will be asking herself – and Stefan – in the week ahead.

Days of Our Lives spoilers say Stefan will let his walls down. He’ll come clean about how he truly feels, which likely means nothing’s really changed. Despite his anger over Gabi’s betrayal, he can’t deny the attraction and connection. Gabi will feel the same way, so they’ll cave in and accept that they belong together. They’ve got a messed-up marriage, but those relationships tend to be the most fun on soaps.

Of course, there’s a chance Stefan will give Gabi a taste of her own medicine. Will he reel Gabi back in only to throw her back out? Stefan could swipe Gabi’s plot for himself and set her up for heartbreak. That may not be a scheme Stefan could stick with though. Days fans know Gabi’s proven pretty irresistible to him so far, so it’ll be interesting to see where things go from here.

It sounds like some complicated “Stabi” emotions are looming. We’ll give you updates as other Days news comes in. Stay tuned to DOOL and don’t forget to check CDL often for the latest Days of Our Lives spoilers, updates and news.