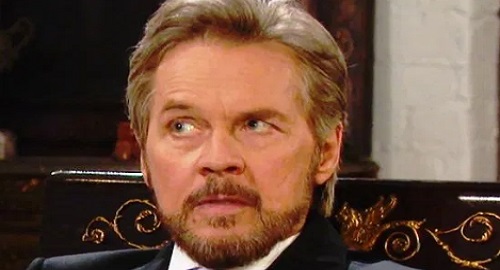 Days of Our Lives (DOOL) spoilers tease that Stefano DiMera (Stephen Nichols) will soon be on the move. As DOOL viewers know, he’s been basically penned up in his secret lair with Princess Gina Von Amberg (Kristian Alfonso) for a while now, but it seems that he’ll soon start moving freely about Salem.

It’s unclear exactly how long Stefano, who is operating in the body of Steve Johnson (Stephen Nichols), has been inhabiting Steve’s body, yet it’s clear that he hasn’t ventured out into public. But that’s about to change. The new DOOL promo for the week of December 16th clearly showed Stefano outside the Brady Pub as Kayla Brady (Mary Beth Evans) and Justin Kiriakis (Wally Kurth) dined inside.

Of course, Stefano isn’t really interested in Kayla, since he’s Stefano and not Steve. Rather, Stefano will probably be interested in setting eyes on Marlena Evans (Deidre Hall), with whom he’s been obsessed for years. Stefano has stated that he wants nothing more than to be reunited with his “queen of the night.”

Well, it looks like Stefano may want to finagle it so that he’s in the same airspace as Marlena, although that’s going to be difficult since he’s in Steve’s body. Stefano really has a problem now, because as soon as he’s detected in Salem, there will be a host of people who will want to turn him back into Steve. So, Stefano will need a disguise.

Luckily for Stefano, it’s the holiday season, and there will be one person he can disguise himself as pretty completely, and that’s Santa! According to DOOL spoilers, Stefano will secretly join in the Christmas party at University Hospital, and he’ll dress up as Santa to do it. It’s the perfect disguise, with a beard, hat, and suit to cover himself up almost totally.

But it seems that even with his clever disguise, someone will be onto him. DOOL spoilers say that Kayla will notice the person in the Santa getup and find him eerily familiar. And in the DOOL winter promo, she’s shown coming up to him in the Santa suit and saying, “Steve, is that you?” Now, what happens from there remains to be seen, but it’s likely that Stefano will somehow get away, leaving Kayla baffled.

After all, Wilhelm Rolf (William Utay) was able to replace Steve’s missing eye with a working one, so Kayla might assume that the person in the Santa suit can’t possibly be Steve since he wasn’t wearing a patch. At any rate, it will be interesting to see what happens next, and whether Stefano makes it through his stint as Santa undetected as Steve.

Do you think that Stefano will manage to get away from Kayla unrecognized? Stay tuned to DOOL and don’t forget to check CDL often for the latest Days of Our Lives spoilers, updates, and news.