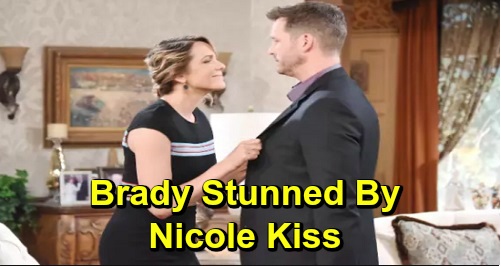 Days of Our Lives (DOOL) spoilers tease that Nicole Walker (Arianne Zucker) will feel lost without Eric Brady (Greg Vaughan). She was on the verge of getting her happily ever after when Eric dropped to one knee and proposed. Nicole would’ve loved nothing more than to say yes and become Eric’s wife, but she couldn’t do it with such a huge secret hanging over them.

That’s why Nicole took a gamble and told Eric the truth about Mackenzie “Mickey” Horton. Nicole was hoping Eric could get past it – and he will eventually. We’ve seen this same song and dance from “Ericole” plenty of times before. The sooner they accept that they’re simply meant to be, the easier it’ll be for everyone.

However, Eric will be in Boston dealing with Mickey’s treatment for a while. When Nicole asked if she could check in for updates on Mickey, Eric suggested she should seek them from his family instead. It sounds like Eric’s cutting off all contact, so Nicole will struggle this holiday season.

Of course, DOOL fans know Brady Black (Eric Martsolf) is Nicole’s bestie and someone who’s usually got her back. Brady regrets some of his less than stellar Days moments – like when he blackmailed Nicole to leave Salem. They’re thankfully in a good place now, so Nicole will once again lean on Brady during the week of December 23-27.

Days of Our Lives spoilers say Brady will gladly support Nicole in any way he can. He’ll just want Nicole to understandthat he cares and will always be there for her. Nicole will be feeling emotional and vulnerable, so that’ll play a role in what comes next. It turns out Nicole will pull Brady closer and plant a steamy kiss.

How will a stunned Brady respond to Nicole’s lip lock? Since he knows Nicole is still in love with Eric, he may suggest they can’t do this. Besides, Brady’s still in love with Kristen DiMera (Stacy Haiduk) deep down. It just isn’t the best plan to head down “Bricole” road again, especially when their friendship matters so much to them.