BY Heather Hughes on May 30, 2019 | Comments: one comment
Related : Days of Our Lives, Soap Opera, Spoiler, Television 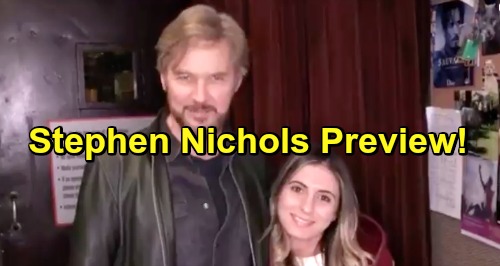 Days of Our Lives (DOOL) spoilers reveal that one NBC soap star is offering a sneak peek at his return. You’ve probably heard by now that Stephen Nichols will be reprising his role as Steve Johnson. He was already back on set filming in April, but it’ll be a while before his new scenes hit the air. DOOL films several months in advance, so Days fans will just have to be patient.

Fortunately, the show provided a little preview to tide viewers over. On the DOOL app, Nichols was featured in a fun video celebrating his comeback. It’s clear that Nichols is thrilled to be on Days of Our Lives where he belongs. He kicked things off by enthusiastically removing his sunglasses and flashing that familiar smile.

“Hey, everybody,” Nichols said. “I’m baaack!” Nichols also walked over to talk with Lucy, the newest addition to Days’ stage manager team. They had a cute exchange where Lucy pretended not to remember Nichols, so he cracked a joke about her taking acting classes.

After they shared a sweet hug, Nichols turned his attention back to those watching the video. He had a special message to pass along. “Fans, people, friends…I’m so happy to be back and thank you for all your support,” Nichols said. “It’s because of you that I’m here. Let’s rock on. Days of Our Lives! Yeah!”

Steve fans have definitely been buzzing about his looming return. Many of them tweeted their approval and expressed how excited they were that Steve’s coming home. “Can’t wait to see you Steve back in Salem and reunited with your Sweetness, counting down the days till u finally arrive in Salem,” said one viewer. “I just love him and so happy he is back,” said another. One more fan exclaimed, “Look at the cutie pie! I so missed him.”