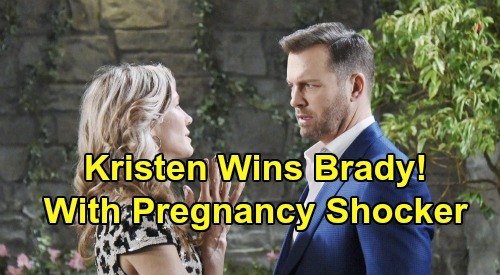 Days of Our Lives (DOOL) spoilers tease that Kristen DiMera (Stacy Haiduk) is determined to win Brady Black (Eric Martsolf) back. As DOOL viewers know, Kristen’s dream to be with Brady came true when she was masquerading as Nicole Walker (Arianne Zucker). She managed to get Brady in bed and into a relationship with “Nicole,” but that all came crashing down when her charade as Nicole came to a sudden end. Now, she’s determined to show Brady that the two of them belong together, but he’s seriously resisting her.

Well, it seems that Kristen may concoct a sinister plan to rope Brady back into a relationship. She’s tried throwing herself at him, which worked up to a point, but still Brady just can’t get past the horrible things that Kristen has done. Kristen knows that she’s got an uphill battle in winning Brady back, and it looks like she’s going to go to extremes.

As DOOL viewers know, Sarah Horton (Linsey Godfrey) is currently pregnant with Eric Brady’s (Greg Vaughan) baby. She’s in a terrible situation, given that Eric just dumped her to get back together with Nicole, and according to DOOL spoilers, she’ll be set to terminate the pregnancy, but at the last minute it appears that she’ll change her mind and decide to keep the baby. And that means that she’ll have plenty of doctor appointments and checkups coming up.

Well, according to DOOL spoilers, Kristen will soon find out about Sarah’s pregnancy. It looks like Xander Kiriakis (Paul Telfer) will inadvertently tip Kristen off about Sarah’s condition, and Kristen will get a bright idea, but she’ll need Dr. Wilhelm Rolf’s (William Utay) help with the whole thing, which in and of itself is a big red flag. It certainly appears that we’ll be looking at a stolen embryo situation where Rolf somehow takes Sarah’s embryo and implants it in Kristen.

This may sound like a completely unbelievable scenario, but keep in mind this is Days of Our Lives that we’re talking about, and over the years we’ve seen some pretty strange things, so you never know! A stolen embryo sounds pretty science-fiction like, but since Rolf is used to bringing dead people back to life, then surely he can steal someone’s embryo!

Assuming we see a stolen embryo storyline and Kristen winds up pregnant in that fashion, then Brady will have a real situation on his hands. Kristen will likely lead him to believe that she got pregnant when they were together as she was masquerading as Nicole. The timing would be just about right, and Brady would probably buy the whole thing.

We’ll see what happens, but it certainly seems like a stolen embryo – Kristen pregnancy storyline is the way it’s going to go. Do you think Brady will soften toward Kristen when he finds out she’s pregnant? Stay tuned to DOOL and don’t forget to check CDL often for the latest Days of Our Lives spoilers, updates, and news.