BY hellodrdavis on July 15, 2019 | Comments: one comment
Related : Days of Our Lives, Soap Opera, Spoiler, Television 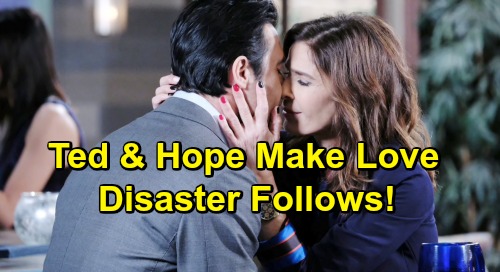 Days of Our Lives (DOOL) spoilers tease that Hope Brady (Kristian Alfonso) will decide to take a big step. She’s had Ted Laurent (Gilles Marini) chasing after her for months. Even while Hope was still married to Rafe Hernandez (Galen Gering), Ted was shamelessly pursuing Hope. And although Hope and Ted have kissed on a couple occasions, Hope has been clear with Ted that she’s not interested in having a romantic relationship with him.

But it seems that Hope’s feelings are changing. She’s now divorced from Rafe, and she’s free to see whomever she chooses. And when Ted went missing after he was kidnapped by Xander Cook (Paul Telfer), Hope became deeply worried about him. When she finally found him, she was absolutely overjoyed and very relieved to find him safe and sound.

But as DOOL viewers know, Ted is keeping a big secret from Hope. When he and Kate DiMera (Lauren Koslow) were being held captive by Xander in the DiMera tunnels, Kristen DiMera (Stacy Haiduk) revealed herself to them, and they apparently struck a deal with her to save their lives. They emerged from the tunnels with a false story about how Stefan DiMera (Brandon Barash) was the one who held them captive.

And that means that Ted is now lying to Hope about something vitally important. He’s keeping Kristen’s existence in Salem a secret from Hope, and that’s something that she’s going to be more than peeved about when the truth finally comes out. But for now, Hope will just be glad to have Ted back safe and sound.

But their intimate time together won’t be without drama. It appears that Ciara Brady (Victoria Konefal) will end up catching her mother in bed with Ted, and that will lead to a blow-up between mother and daughter. Ciara will be appalled to find her mom and Ted together, and she’ll let her mom know it!

But the conflict with Ciara will be the least of Hope’s problems once she finally finds out that Ted has been lying to her about Kristen, and that he was deliberately keeping something from her when she decided to take their relationship to the next level. Hope won’t be pleased to say the least, and it’s safe to say that a major blowup is right around the corner.

Of course, most DOOL viewers probably figured that Hope and Ted were never really meant to be. Plus, Gilles Marini, who portrays Ted, is going to be exiting the show this summer, so there’s really no future for Hope and Ted anyway. But how will they ultimately part? We’re betting that Hope will kick Ted to the curb as soon as his lie is revealed.

How do you think that Ted will exit the show? Stay tuned to DOOL and don’t forget to check CDL often for the latest Days of Our Lives spoilers, updates, and news.