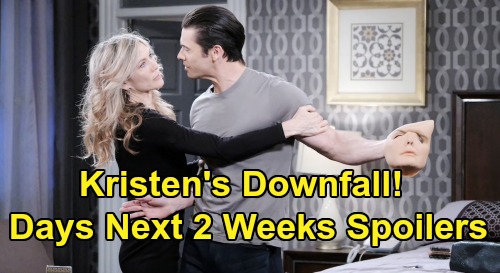 Days of Our Lives (DOOL) spoilers for the next two weeks tease that some shockers are on the way. During the week of July 15-19, Eric Brady (Greg Vaughan) will consider a bold move. He’ll mull over the idea of leaving town and starting a new life elsewhere. It has to be awfully painful to be around “Nicole Walker” (Arianne Zucker) and know she wants absolutely nothing to do with him.

However, it looks like a pep talk from Abe Carver (James Reynolds) may shift Eric’s perspective. Fortunately, Eric will be sticking around. He’ll just try to hang in there and keep dealing with “Nicole’s” rejection. Speaking of rejections, “Nicole” will face another one as well. Brady Black (Eric Martsolf) will once again tell “Nicole” that they can only be friends for Eric’s sake.

“Nicole” won’t be pleased when Brady pulls away from her kiss and wants to cool things off. While Kristen DiMera (Stacy Haiduk) fumes, Xander Cook (Paul Telfer) will plot his revenge. He’ll be arrested for his part in the hostage situation and decide to get back at Kristen by stealing her “Nicole” mask. To leave her hotel room, Kristen will have to pose as Susan Banks (Stacy Haiduk) instead.

That’ll leave Kristen in Brady’s orbit again, so she’ll be unable to resist making a move. A confused Brady will wonder what in the world “Susan” thinks she’s doing. Over with Gabi Hernandez (Camila Banus), Days of Our Lives spoilers say she’ll dig for the truth. Gabi will be convinced “Nicole’s” behind Stefan DiMera’s (Brandon Barash) problems – and she’ll vow to prove it.

During the week of July 22-26, Rex Brady (Kyle Lowder) and Sarah Brady (Linsey Godfrey) will do something they should’ve done months ago. They’ll move out of Eric’s apartment! It never made sense why two highly successful doctors were living with Eric, especially when he always had to work around their date night and sex schedule. It’s great that the newlyweds are going to give Eric some space.

Other Days spoilers say Xander will push Rex’s buttons. It’ll lead to a major confrontation between them, so DOOL fans can expect some fierce scenes. Next, Eve Deveraux (Kassie DePaiva) will catch Jack Deveraux (Matthew Ashford) off guard. Her total turnaround on the memory serum will leave Jack wondering what’s up. Jack will try to figure out why Eve changed her mind about him taking it.

Later, Jack will get his answer when he spots Eve’s act of betrayal. It sounds like Eve will try to replace the memory serum with some other harmless yet ineffective substance. She’ll most likely hope she can sabotage Jack’s attempt at recapturing the past. Luckily, it seems Jack will catch the traitor just in time.

Other Days of Our Lives spoilers state that the real Susan will hold Kristen at gunpoint. It serves Kristen right after what she did to Ted Laurent (Gilles Marini) and Kate Roberts (Lauren Koslow)! Finally, Haley Chen (Thia Megia) will struggle with some troubling visions. She won’t be able to get Claire Brady’s (Olivia Rose Keegan) dark side off her mind, so that’ll lead to some disconcerting moments.

The next two weeks are sure to bring some hot drama. We’ll give you updates as other Days news comes in. Stay tuned to DOOL and don’t forget to check CDL often for the latest Days of Our Lives spoilers, updates and news.