BY hellodrdavis on July 13, 2019 | Comments: one comment
Related : Days of Our Lives, Soap Opera, Spoiler, Television 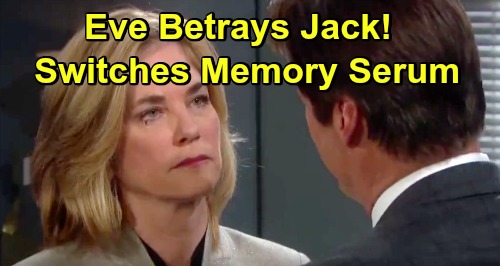 Days of Our Lives (DOOL) spoilers tease that Jack Deveraux (Matthew Ashford) has a big decision on his hands. He recently came into possession of Dr. Wilhelm Rolf’s (William Utay) diary, which holds the formula for the memory serum that Will Horton (Chandler Massey) used to overcome his amnesia. Jack’s more than a little curious about the serum, and he’s been toying with the idea of trying to get his memories back.

Of course, Jennifer Deveraux (Melissa Reeves) was thrilled to learn that Jack had Dr. Rolf’s diary. She wants nothing more than for Jack to take the serum and get his memories back. She assumes that once that happens, Jack will revert back to the “old Jack” who she knows and loves.

But for Eve Deveraux (Kassie DePaiva), the thought of Jack getting all his memories back strikes great fear. Eve knows that the “new Jack” loves her and is committed to their future. But she also knows that if Jack regains his memories of his life with Jennifer and his kids, then there’s a good chance that he’ll leave her and go back to them.

Eve doesn’t want to see the “old Jack” return under any circumstances, but Jack is inching closer to the decision to take the serum and actively pursue getting his memories back. And the DOOL weekly preview for the week of July 15th shows Jack reaching a decision to take the serum and do everything in his power to reclaim his memories and be whole again.

Well, that’s going to put Eve in an awkward position. She’ll want to appear to support Jack, and according to DOOL spoilers, she’ll shock him when she suddenly makes an about face and supports him in his quest to retrieve his memories. She’ll suddenly offer her support to her husband as he prepares to take Dr. Rolf’s serum.

But we have to remember that this is Eve we’re talking about, and deep down there’s no way she wants Jack to get his memories back. So that’s going to lead her to commit a serious act of betrayal against Jack. Exactly what she does remains to be seen, but DOOL spoilers say she’ll take drastic measures to stop Jack from regaining his memory.

And that certainly sounds like Eve’s going to tamper with the serum. It would be just like Eve to break into the hospital lab or whatever facility makes the serum and switch out the serum with a placebo! That would certainly be a drastic measure, and it would allow Eve to support Jack’s efforts while preventing him from getting his memories back.

But unfortunately for Eve, it looks like she won’t get away with her scheme, as DOOL spoilers also say that she’ll be caught in her act of betrayal. Will Jack catch her? If so, that could be the end of Jack and Eve!

At any rate, it seems that Eve is going to go to great lengths to keep Jack from taking steps that could draw him closer to Jennifer and his family. Do you think Eve will try to replace the memory serum with a placebo? Stay tuned to DOOL and don’t forget to check CDL often for the latest Days of Our Lives spoilers, updates, and news.