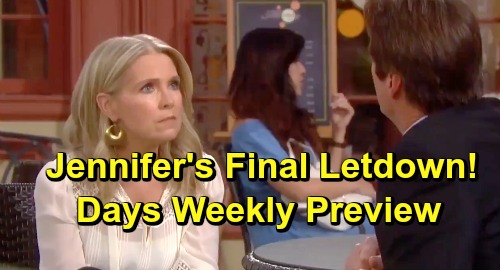 Days of Our Lives (DOOL) spoilers for the week of July 15-19 tease that Jennifer Horton (Melissa Reeves) will hold out hope for the real Jack Deveraux (Matthew Ashford) – not the pod person she’s come to know since his return from the “dead.” Jenn’s convinced that true Jack’s still in there somewhere. She knows there’s a good heart underneath the bad side Eve Deveraux’s (Kassie DePaiva) brought out.

Jack isn’t sure about using Dr. Wilhelm Rolf’s (William Utay) memory serum, but Jennifer will make one more passionate pitch. Her powerful speech will be about the man Jack used to be and the man he could become again. Jennifer was madly in love with Jack, so he was definitely someone she could rely on and be proud of.

Jack and Jenn were a Days supercouple, so plenty of DOOL fans remember that love as well. They’ll undoubtedly reunite down the road, but there’ll be more obstacles first. It turns out Jennifer will get through to Jack this week. He’ll decide that he wants to get his memories back, but there’s a good chance he’ll be clear about where stands.

Jack doesn’t recall his history with Jennifer or the wonderful life they built together. He can’t remember their deep connection, so he may be adamant that Eve is his wife and will remain by his side. Later, Days of Our Lives spoilers say Jack will fill Eve in on his memory recovery plan. She won’t look happy about it, but he’ll insist this is something he has to do.

Jack may promise that it won’t change his feelings, but Eve won’t be as certain. She’s seen Jenn’s bond with the real Jack firsthand, so she’ll have serious concerns. Nevertheless, although Jack takes the serum his love for Jennifer won’t return, at least not immediately.

As for Jennifer, she’ll determine that it’s time to let go of the past. Jennifer will be weary from chasing after Jack and doing all this begging. Jack will crush Jennifer’s last bit of hope, so she’ll opt to move on and seek love elsewhere.

Days of Our Lives spoilers say Dr. Henry Shah (Andre Khabbazi) will return to DOOL later this month. He’s the trusty backup beau who’s got the hots for Jennifer, but he always loses out in the end. Sadly, we foresee more heartbreak in poor Henry’s future!

It sounds like some fun twists and turns are ahead on the NBC soap. We’ll give you updates as other Days news comes in. Stay tuned to DOOL and don’t forget to check CDL often for the latest Days of Our Lives spoilers, updates and news.