Days of Our Lives Spoilers: Thaao Penghlis and Billy Flynn’s DiMera Family Reunion Pic – Should EJ Comeback Be Next? 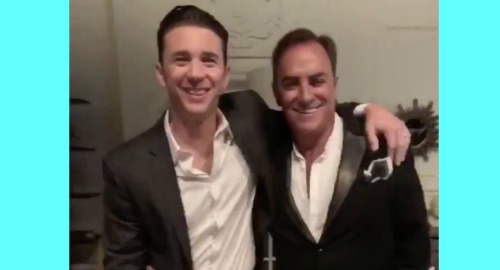 Days of Our Lives (DOOL) spoilers reveal that one NBC soap star is acknowledging a fun reunion. Thaao Penghlis is currently back onscreen for a stint as Tony DiMera. Meanwhile, Billy Flynn is reprising the role of Chad DiMera in DOOL’s digital new series. The online show features Chad and Abigail DiMera (Kate Mansi) in Paris, which will set up their return to the main soap down the road.

However, Penghlis was thrilled to be reunited with his TV brother behind the scenes, so he did a sweet post with Flynn to celebrate. Of course, we should point out Chad only knows Andre DiMera (Thaao Penghlis), not Tony. Days fans will recall that Tony “died” in April 2009. Chad (then played by Casey Deidrick) debuted that year in June, so he just missed meeting Tony.

Once Flynn took over the role of Chad in 2014, Andre made his return to Salem in 2015. Back in the ‘80s, Andre had plastic surgery to look like cousin Tony, who ultimately became his brother through a rewrite. Andre turned out to be Stefano DiMera’s (Joseph Mascolo) biological son and Tony is adopted, so family trees can get awfully complicated in Salem. This one’s a mess!

Family happened to be just what Penghlis wanted to acknowledge through a heartfelt message on Twitter. “Love our DiMera family,” Penghlis said. “Wonderful day with my young sibling Chad & Billy. Always resonating when we share the life together. Cheeky men who love to stir. Days #NBC”

Stefan DiMera (Brandon Barash) is also a member of the DiMera fam, but there’s another brother we’d really like to see back in action. Naturally, we’re talking about EJ DiMera (last played by James Scott). It’d be great to see EJ make a triumphant return after his lengthy recovery.

At this point, it’s pretty clear Scott has no interest in coming back to Days of Our Lives. The show apparently can’t work anything out or surely he would’ve returned by now. After all, we’ve had an absolute flood of comebacks over the last few years. Never say never, but it’s probably time to recast and be done with it. There must be some hot British actor out there who could take over.

We’re not saying we’d ever forget Scott’s fantastic portrayal, but a new EJ could lead us into the future. Days seemingly laid the groundwork since EJ was burned in the fire. Kayla Johnson (Mary Beth Evans) warned that EJ probably wouldn’t be recognizable, so there you have it. An easy door for the new EJ to step through.

Should DOOL go ahead and bring EJ home? Would you like to see a shorter stint with Sami Brady (Alison Sweeney) or should they split so EJ can stay in Salem? Days of Our Lives spoilers say more drama’s brewing no matter what, so don’t miss all the action. We’ll give you updates as other news comes in. Stick with the NBC soap and don’t forget to check CDL often for the latest Days of Our Lives spoilers, updates and news.

Love our DiMera family. Wonderful day with my young sibling Chad & Billy. Always resonating when we share the life together. Cheeky men who love to stir. Days #NBC pic.twitter.com/zs8eNzjTO3