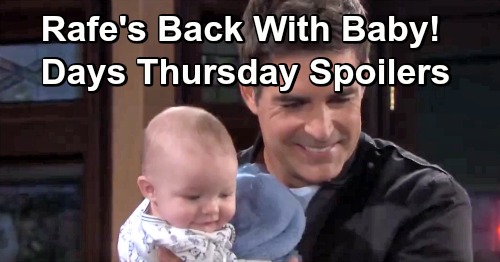 Days of Our Lives (DOOL) spoilers for Thursday, April 4, tease that Tripp Dalton (Lucas Adams) and Haley Chen (Thia Megia) will head to their immigration interview. They’ve carefully rehearsed a story about how they met and fell in love, but they’ll still face some snags once they get grilled. Haley and Tripp don’t really know each other very well, so they’ll struggle as they pretend to be a solid couple.

After navigating a few obstacles, things will start to settle down. By the time Tripp and Haley walk away, they’ll feel like the interview turned out pretty great. Of course, Claire Brady (Olivia Rose Keegan) will be a nervous wreck when she gets updates. Haley and Tripp will be over the moon, so Claire will fear their bond is growing stronger. She’ll also worry they’re actually going to pull this off!

As a result, Claire will immediately get in touch with Eve Donovan (Kassie DePaiva). She’ll insist they have to blow up this sham marriage right now, but Eve will once again push Claire to be patient. That’s not Claire’s forte, so she’ll remain a total mess in Thursday’s Days episode – especially when she finds out JJ Deveraux (Casey Moss) is hot on her trail.

DOOL fans know JJ is highly suspicious of Claire and the reason she has that lighter. He can’t shake his concerns, so he’ll interrogate Claire and hope for some answers. Days of Our Lives spoilers say Claire will provide a flimsy explanation, so JJ will decide to take matters into his own hands. He’ll tell Claire he’s taking the lighter to the Salem PD so they can analyze it as evidence.

While Claire attempts to wiggle out of this nightmare, Rafe Hernandez (Galen Gering) will return with Jordan Ridgeway’s (Chrishell Hartley) baby. Days of Our Lives spoilers say this kid will cause even more drama for Rafe and Hope Hernandez (Kristian Alfonso). It’s clear that their relationship is headed downhill fast, so we’ll see how long they can make it work.

In the meantime, Ben Weston (Robert Scott Wilson) will get the shocking baby news. He had no idea Jordan had a son, so he’ll be stunned when Hope reveals his sister’s secret. Sadly, Ben’s past will haunt him as he tries to see little David. He’ll hit some hurdles over the next couple weeks, but he should have a chance to connect with his nephew eventually.

Some fantastic scenes are coming up on the NBC soap. We’ll keep you posted as other Days details emerge. Stay tuned to DOOL and don’t forget to check CDL often for the latest Days of Our Lives spoilers, updates and news.