Days of Our Lives Spoilers: Thursday, December 19 – Ciara Gets Busted by Victor – Kayla and Kate Face Off – Sonny Leans on Evan 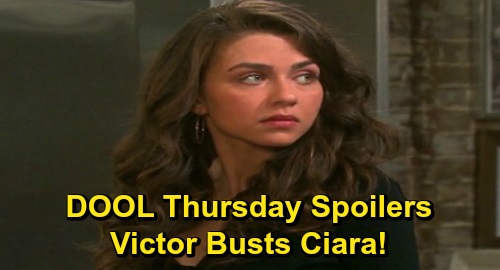 Days of Our Lives (DOOL) spoilers for Thursday, December 19, tease that Kate Roberts (Lauren Koslow) will get on Kayla Brady’s (Mary Beth Evans) last nerve. They’ll cross paths at some point, which will give Kate the opportunity to push Kayla’s buttons. DOOL fans know these two don’t get along, but Kate’s actions still seem a bit cruel considering the massive secret she’s keeping about “Steve Johnson” aka Stefano DiMera (Stephen Nichols).

Then again, Kayla nearly gave Kate’s heart away after her last brush with death, so we can see how Kate would stay pretty bitter! Of course, there have been even more issues between them over the last couple years. Days spoilers say Kate and Kayla’s rivalry is only going to get worse once Kate’s involvement with Stefano is exposed.

In the meantime, Stefano will escape from the secret lair while Princess Gina Von Amberg aka Hope Brady’s (Kristian Alfonso) left holding a gun. Once Rafe Hernandez (Galen Gering) barges in, “Hope” will make him believe she’s just there to investigate, too. Days of Our Lives spoilers say Rafe will search the premises and immediately notice some major Stefano clues. It won’t take him long to assume that this was indeed Stefano’s hideout.

Abe Carver (James Reynolds) will arrive soon enough, so he’ll get updates on everything Rafe’s uncovered. Afterward, Rafe will be intrigued when he spots a tiara. He’ll show it to “Hope” and wonder what she thinks about it, so Princess Gina will try to throw Rafe off the trail. She’ll point out that Marlena Evans (Deidre Hall) is Stefano’s Queen of the Night and suggest that could be why he has it.

Other Days of Our Lives spoilers say Sonny Kiriakis (Freddie Smith) will lean on Evan Frears (Brock Kelly). He was heartbroken when Will Horton (Chandler Massey) summoned him to ask for a divorce, but he also gets why Will made that decision. Sonny will take some baby steps forward as he continues bonding with Evan on Thursday. They’ll grow closer, but Sonny’s in for a shock when Will is likely proven innocent down the road.

Until then, Victor Kiriakis (John Aniston) will grow suspicious of Ciara Brady (Victoria Konefal). Xander Kiriakis (Paul Telfer) might warn Vic that his precious granddaughter has been snooping and can’t be trusted. Regardless, Victor will dig around and confirm that Ciara’s been visiting Ben Weston (Robert Scott Wilson) behind his back.

Since Ciara promised she’d put Ben in the rearview mirror, she’ll have some explaining to do! We’ll keep you posted as other Days news comes in. Stay tuned to DOOL and don’t forget to check CDL often for the latest Days of Our Lives spoilers, updates and news.