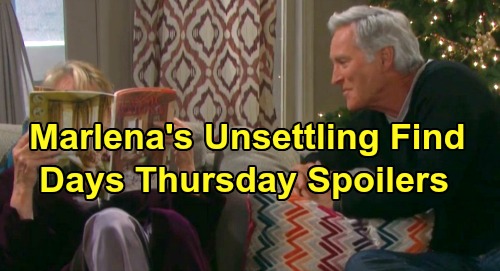 Days of Our Lives (DOOL) spoilers for Thursday, December 26, tease that Stefano DiMera aka Steve Johnson (Stephen Nichols) will be in a tight spot. After stealing Roman Brady’s (Josh Taylor) Santa suit, Stefano was able to get close to Marlena Evans (Deidre Hall). He even encouraged Marlena to come sit on Santa’s lap, but she laughed it off and soon turned her attention elsewhere.

However, Stefano’s disguise wasn’t enough to fool Kayla Brady (Mary Beth Evans). She suspects that’s “Patchy Claus,” so she followed “Steve” and expects some answers! Days of Our Lives spoilers say Stefano will wonder how he’s going to wiggle out of this. He’d rather not reveal his new face to anyone just yet, so he’ll hope he can dodge a bullet somehow.

It turns out someone else’s misfortune will bring Stefano’s lucky break. Kayla will learn there’s some emergency she’s needed for, so she’ll have to put her patient first. She won’t stick around and force Santa to explain, so Stefano can hightail it out of the hospital, ditch the suit and settle back in his hideout.

Across town, Marlena will be unsettled by a shocking gift – and we’re not talking about Hattie Adams’ (Deidre Hall) regifted panties! Hattie indeed has that hilarious present in mind for her lookalike, but it’s Stefano’s gift that’ll truly rattle Marlena. She’ll find a black onyx brooch in her purse and immediately recall its significance to her past with Stefano.

As for Hattie, she’ll hope Roman’s willing to give her some help. Since Roman will be laying down some ground rules for Hattie next week, it sounds like Hattie may end up working at the pub for a while. She could use a job now that she’s a free woman. Roman needs another waitress since one recently quit, so he should be willing to put up with Hattie as long as she behaves.

Other Days of Our Lives spoilers say Sarah Horton (Linsey Godfrey) will get a special present from Xander Kiriakis (Paul Telfer). DOOL fans know Xander spent most of his Christmas Eve moping alone and reflecting on happier times. He finally couldn’t take the distance anymore, so he eventually showed up at Sarah’s door in Boston.

Sarah was surprised to see Xander, but he’s not done catching her off guard. Days spoilers say Xander will hand over a gift that touches Sarah’s heart, so she should appreciate his love and support. Things are complicated since Eric Brady (Greg Vaughan) doesn’t want Xander anywhere near Mackenzie “Mickey” Horton, but let’s hope fake Daddy Xander can sneak in a little Mickey time.

Some great scenes are coming up on the NBC soap. We’ll give you updates as other Days news emerges. Stay tuned to DOOL and don’t forget to check CDL often for the latest Days of Our Lives spoilers, updates and news.