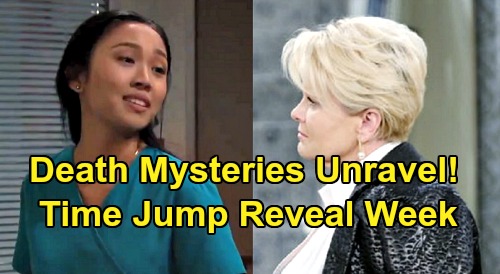 Days of Our Lives (DOOL) spoilers reveal that fans still have plenty of unanswered questions when it comes to the time jump. In November, DOOL skipped one year ahead and turned the lives of many Salemites upside down – at least from the perspective of viewers. Of course, Salemites had been living their lives offscreen during that year, which seemed like a blink of an eye to us and Jennifer Deveraux (Melissa Reeves).

Ever since then, Days of Our Lives has been slowly offering hints and filling in a few gaps. They eventually revealed that Will Horton (Chandler Massey) was behind Adrienne Kiriakis’ (Judi Evans) death. It was also revealed that Xander Kiriakis (Paul Telfer) posed as Sarah Horton’s (Linsey Godfrey) “baby daddy,” although Nicole Walker (Arianne Zucker) ultimately spilled the beans about that.

Days revealed the death of Haley Chen (Thia Megia) as well and showed us that Ben Weston (Robert Scott Wilson) was on death row. Nevertheless, there are still loads of mysteries left to unravel – and the NBC soap will explore most of those with a special week of episodes in January. In the new issue of Soap Opera Digest, DOOL Head Writer Ron Carlivati opened up about this crucial week and what it means.

“Some of the mysteries that are still unfolding with this time jump are how did Adrienne die? How did Haley die? How did Kristen’s baby die? There is so much to tell and we do it in this week coming up in January,” Carlivati said. He pointed out that almost the whole week will take place during the year fans missed. We’ll step back in time as we explore that horrible night that’s been mentioned so often.

Carlivati admitted that viewers won’t get every single answer just yet. After all, this is a soap and they have to find ways to keep the drama going strong! However, there will definitely be some major twists exposed during this big event in January. “It is super emotional,” Carlivati promised. “It’s a lot. It’s a week that I don’t think any fan of the show wants to miss.”

Just how much will Days expose? It’ll be interesting to find out since Kristen’s baby was likely swapped with Sarah’s child, and Will was most likely framed for killing Adrienne. As for Haley, we know a staircase tumble claimed her life after an altercation with Kristen, but there’s more to the story. Days also hasn’t revealed Jordan Ridgeway’s (Chrishell Stause) true murderer yet, so that’s something else that should be explored eventually.