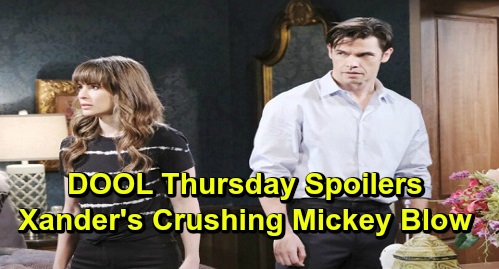 Days of Our Lives (DOOL) spoilers for Thursday, December 5, tease that “Hope Brady” aka Princess Gina (Kristian Alfonso) will put up a fight. Abigail DiMera (Kate Mansi) just approached “Hope” about looking into Jennifer Horton’s (Melissa Reeves) case, which put Eve Donovan (Kassie DePaiva) behind bars. “Hope” will try to talk Abigail out of digging through the files for clues that might’ve been missed. She certainly won’t want Abigail to find out she’s the one who pushed Jennifer.

Abigail won’t understand “Hope’s” resistance, but she might point out that she’s legally entitled to look at the documents. Thanks to Roman Brady (Josh Taylor), Abigail knows “Hope” can’t stop her. Days spoilers say Abigail will indeed search through the filing cabinet and hope she finds evidence that could reveal the truth.

Abigail won’t uncover the whole story just – and neither will Jennifer, who’ll be struggling to remember at the hospital. However, Jennifer may have a flash or two that proves helpful. She could recall a couple puzzle pieces that will allow her to see the big picture down the road.

In the meantime, Days of Our Lives spoilers say Sarah Brady (Linsey Godfrey) will have some bad news for Xander Kiriakis (Paul Telfer). She’ll explain that Eric Brady (Greg Vaughan) is only willing to share custody of Mackenzie “Mickey” Horton on one condition. Sarah will admit Eric wants Xander out of Mickey’s life completely and he’s not backing down.

Days of Our Lives spoilers say Xander will fly into a rage and prepare to confront Eric. He’ll refuse to let Eric keep him away from Mickey, but Sarah will worry that Xander could cost her everything. Since Sarah hid the truth about her daughter’s paternity, she’ll know that could be a huge strike against her in court.

Later, DOOL spoilers say Xander will cool down and make a difficult decision. He’ll assure Sarah that he’s willing to back off to ensure she stays with Mickey, but it won’t be easy. Xander has come to think of himself as Mickey’s dad, so it’ll be heartbreaking to cut himself out of her life.

As for Eric, he’ll take Mickey over for a visit with John Black (Drake Hogestyn) and Marlena Evans (Deidre Hall). They’ll be pleased that Eric finally knows about his little girl, but trouble’s brewing. Marlena will realize Mickey’s running a fever by the end of the week, and it’ll lead to a diagnosis that could change everything! We’ll give you updates as other Days details emerge. Stick with DOOL and don’t forget to check CDL often for the latest Days of Our Lives spoilers, updates and news.