Days of Our Lives Spoilers: Thursday, March 7 – Brady and Gabi Takedown Stefan – Claire and Eve Team Up For Evil 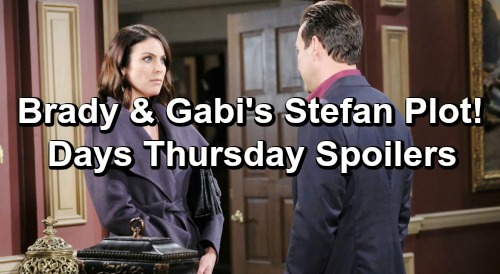 Days of Our Lives (DOOL) spoilers for Thursday, March 7, tease that Brady Black (Eric Martsolf) will push Gabi Hernandez (Camila Banus) to help him out. After Brady’s latest confrontation with Stefan DiMera (Tyler Christopher), he’s even more determined to bring Stefan down. Brady can’t do it alone, so he’ll pressure Gabi to take the lead on a scheme. His sneaky plan will require her particular skillset.

Gabi outsmarted Stefan by going to the DiMera board and convincing them to keep her company. She enjoyed rubbing that victory in Stefan’s face, so she’ll be tempted to score another one. Brady will tout the benefits of teaming up and getting Stefan out of the picture. He won’t really see a downside for Gabi, but she may worry about the risks. Stefan can be pretty ruthless when he wants to be!

However, Brady will assure Gabi that he’s got her back. He’ll do whatever he can to get Gabi to move forward with his plot. Days of Our Lives spoilers say Gabi will ultimately agree, so trouble’s brewing. It looks like she’ll end up trying to seduce Stefan soon enough. That could certainly make a few waves in Stefan and Chloe Lane’s (Nadia Bjorlin) blooming romance.

On Thursday, Stefan will tell Chloe that he’d like to be more than friends. Chloe probably won’t be opposed to the idea, so they’ll share another kiss just as Gabi appears. Days spoilers say Gabi will spar with Stefan over her interruption. He won’t appreciate it, so he’ll get in Gabi’s face and hint that maybe she’s jealous.

Of course, moments like this could help Gabi set her trap. She may realize Brady’s plan is going to be easier than she thought. In the meantime, Claire Brady (Olivia Rose Keegan) will get in touch with Eve. DOOL fans know Haley has been growing closer to Tripp Dalton (Lucas Adams), so Claire’s concerned about the threat to her romance.

Now that Haley’s living at the loft, Claire believes the situation is dire. She’ll do something cruel on Thursday and hope she can eliminate the competition. Days of Our Lives spoilers say Claire’s betrayal will bring major drama. It seems she’ll fill Eve in on where Haley’s staying, so some chaos is looming.

Over with JJ Deveraux (Casey Moss), he’ll deal with more of Eli Grant’s (Lamon Archey) questions. JJ will fight to protect Haley as he works to keep her in the country. Across town, Abe Carver (James Reynolds) will do some event planning with Sheila Watkins (Tionne “T-Boz” Watkins). They’ll put together a charity fundraise and bond in the process.

Some complicated feelings are developing, so Sheila and Abe will have to admit it eventually! We’ll give you updates as other Days news comes in. Stick with DOOL and don’t forget to check CDL often for the latest Days of Our Lives spoilers, updates and news.