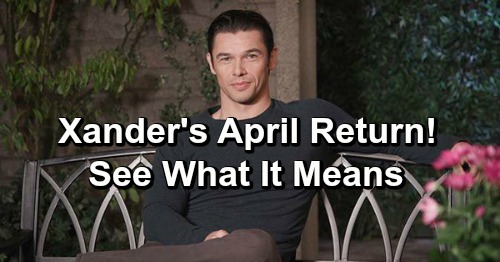 Days of Our Lives (DOOL) spoilers tease that it won’t be long until Xander Cook (Paul Telfer) stirs up trouble again. He always pops up to cause chaos when other Salemites least expect it. You’ve probably heard by now that Nicole Walker (Arianne Zucker) is back starting April 25. It looks like Xander will also return during the month of April, but the circumstances of that return are a bit murky.

It’s possible Xander will just appear in flashbacks at first. After all, Nicole’s absence will have to be explained. She didn’t die in that warehouse explosion after all, so Days will have to show us how she survived. Since Xander survived the blast as well, he could fit in with all that. Perhaps Nicole and Xander even made a new detail. He might’ve helped her in exchange for something.

However, Xander should reenter the canvas eventually. Nicole is the love of Eric Brady’s (Greg Vaughan) life, so he may not be able to resist her for long – even with Sarah Horton (Linsey Godfrey) in the picture. Sarah doesn’t seem that into Rex Brady (Kyle Lowder) anymore, so Xander and Sarah could be revisited. Many Days of Our Lives fans thought they actually had some sizzling chemistry!

Before Paul Telfer’s latest exit, he gave an intriguing interview in Soap Opera Digest. Telfer talked about Xander being quite infatuated with Sarah and trying to properly woo her. None of that really played out, so it’s possible it was something Telfer had shot for down the line. Maybe he was referring to some scenes that are still to come.

We have to remember that Days films several months in advance, so sometimes actors don’t get the timing exactly right in their interviews. It can be tough to keep info straight after that long! Whatever the case, there’ll be plenty of DOOL drama for Xander to get involved in once he’s around.

In addition to sniffing around Sarah again, Xander could taunt Eve Donovan (Kassie DePaiva) with Dr. Rolf’s (William Utay) diary. He swiped it from her during their last confrontation, so he needs to get some sort of payoff.

Xander could also get mixed up in the Diana Cooper (Judith Chapman) mayhem. He was trying to score info from Leo Starke (Greg Rikaart) for a while and there’ll be a bizarre Kristen DiMera (Stacy Haiduk) connection soon. After Dr. Marlena Evans (Deidre Hall) is attacked, a nurse will tell John Black (Drake Hogestyn) that Kristen is to blame. That doesn’t appear to be true, but Xander could still get grilled if other Kristen incidents come up.