BY hellodrdavis on February 25, 2019 | Comments: one comment
Related : Days of Our Lives, Soap Opera, Spoiler, Television 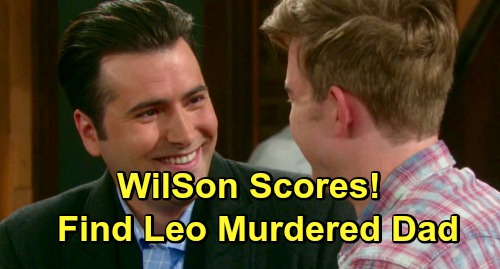 Days of Our Lives (DOOL) spoilers tease that Sonny Kiriakis (Freddie Smith) and Will Horton (Chandler Massey) will soon commit another crime together. These two were just arrested for covering up Leo Starke’s (Greg Rikaart) “death” and obstructing justice. Leo finally made good on his promise and turned them in to the police for their actions, and now they’re in real trouble.

But it seems that Sonny and Will are going to get more energized to bring down Leo as a result of their arrest. They won’t be content to let Leo ruin their lives, and they’ll be more determined than ever to find some dirt on him that they can use to save themselves. So after Justin Kiriakis (Wally Kurth) secures their release from custody, they’ll ramp up their plot to bring down Leo.

Of course, Justin will probably warn them to be on their best behavior while they’re out on bail, but WilSon will feel that they have to do something to neutralize Leo. And that will lead them back to Leo’s mother, Diana Cooper (Judith Chapman). From the beginning, Sonny and Will have figured that the key to bringing down Leo is his mom.

And they’re right. Diana indeed knows something explosive about Leo. Leo killed the man he believes to be his father, Mr. Cooper, who was abusive toward Diana. And given a previous conversation between Leo and Diana, it was a cold-blooded murder. Leo’s apparently a very dangerous individual when provoked.

Could Diana have some sort of physical evidence of the crime tucked away for safekeeping? Given that the relationship between Diana and Leo isn’t the best, it’s always a possibility. Diana may feel that she needs ammunition against Leo in the event he comes after her in the future. She could keep that evidence with her in her hotel room.

Of course, Will and Sonny don’t know about Leo killing Mr. Cooper, but they have a strong suspicion that he’s hiding something that relates to his mother in some way. So, the two of them will decide to break into Diana’s hotel room and snoop around, looking for anything they can use against Leo.

Hopefully, Will and Sonny will be careful in their endeavor and won’t get caught. Do you think that they’ll find evidence of Leo’s crime in Diana’s room? Stay tuned to DOOL and don’t forget to check CDL often for the latest Days of Our Lives spoilers, updates, and news.