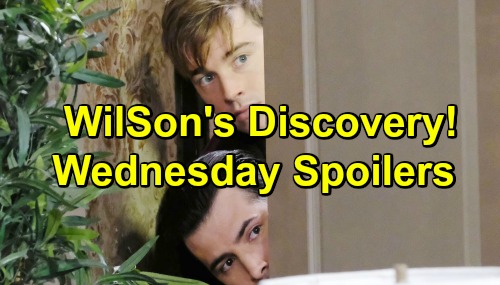 DOOL fans know Diana is likely lying to manipulate John and Marlena. “Doc” will suspect that’s the case, so she’ll present the possibility during this conversation. However, Marlena will rip into John for keeping secrets first. Days of Our Lives spoilers say they’ll argue a bit, but they’ll ultimately work through their issues. Diana will obviously have to work harder if she wants to keep “Jarlena” apart.

Unfortunately, that’s exactly what Diana will do. She’ll launch a deadly attack on Marlena on next week’s new Days episodes, March 11-15, so more trouble’s looming for this couple. Until then, Sonny Kiriakis (Freddie Smith) and Will Horton (Chandler Massey) will get sneaky. Days of Our Lives spoilers say they’ll slip in Diana’s hotel room on a critical mission.

Will and Sonny will dig around in hopes of getting rid of Leo. If they can just find some solid ammunition, maybe they can push Leo out of the picture for good. Sonny and Will are certainly going to give it their best shot in Wednesday’s new Days episode, March 6!

Meanwhile, Rex Brady (Kyle Lowder) will take steps to protect Chloe Lane (Nadia Bjorlin). He just spotted a man with a gun, so he’s concerned for Chloe’s safety. There’s nothing to stop more of El Fideo’s (Andoni Gracia) men from coming back to kill Chloe. That’s why Rey will confront this armed thug and demand some answers.

Fortunately, this man isn’t actually a threat. It turns out he works for Brady Black (Eric Martsolf), who hired a bodyguard for Chloe. Brady doesn’t think Stefan DiMera (Tyler Christopher) and his team can handle the job, so he had his own guard follow Chloe to prevent any harm.

Days spoilers say Chloe will be relieved once she knows the truth, but she should be pretty annoyed with Brady. She’s been a mess over all her suspicions, so she may blast him for letting her think she was still in danger. Of course, Brady may insist that Chloe would’ve been without his help!

Since Chloe probably won’t share that perspective, she may push Brady to back off or at least warn her the next time he tells a guy with a gun to tail her. It sounds like some shockers are ahead in Salem. We’ll give you updates as other Days news comes in. Stay tuned to DOOL and don’t forget to check CDL often for the latest Days of Our Lives spoilers, updates and news.