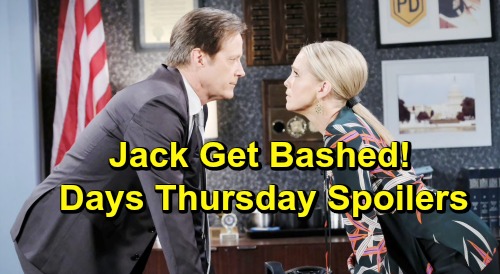 Days of Our Lives (DOOL) spoilers for Thursday, May 30, tease that Ben Weston (Robert Scott Wilson) will explain his dilemma to Dr. Marlena Evans (Deidre Hall). Ben believes Claire Brady (Olivia Rose Keegan) started the cabin fire, but he can’t confirm his suspicions. That’s why he’ll push Marlena to hypnotize him and hopefully help him remember more about that night.

Whether Ben reveals his pick for the culprit or not, he’ll at least let Marlena know this is important to him. Now that Eve Deveraux (Kassie DePaiva) is the police commissioner, Ben’s more nervous than ever – and he should be! Eve’s determined to pin the cabin blaze on Ben, so he needs to get some answers before he gets locked up for attempted murder.

Days of Our Lives spoilers say Ben will indeed be hypnotized soon enough. He won’t recall anything new except for one crucial detail: Claire’s ringtone. Of course, Ben won’t know it’s Claire’s ringtone just yet. That’s something that’ll click for Ben next week, so DOOL fans will want to stay tuned.

In the meantime, John Black (Drake Hogestyn) will deliver a heartfelt plea. He’ll beg Eve to hand over Dr. Wilhelm Rolf’s (William Utay) diary for Will Horton’s (Chandler Massey) sake. John may tug at Eve’s heartstrings and suggest that she has the power to keep Will with his family. Will’s going to die without a special cure for this unique brain tumor, so John will hope Eve caves in.

Eve would do anything to have her daughter, Paige Larson (True O’Brien), back. She can surely understand where Will’s loved ones are coming from, but she won’t be in the position to help. That’s because Xander Cook (Paul Telfer) swiped the diary during his last Days of Our Lives stint. Eve will admit it’s out of her hands, so Will’s condition will remain dire.

Other Days spoilers say Tripp Dalton (Lucas Adams) will be in a tight spot. He went to retrieve the passports Rory (Kevin Riggin) left behind, but Jack Deveraux (Matthew Ashford) beat him to the punch.

Jack will push Tripp to reveal JJ Deveraux (Casey Moss) and Haley Chen’s (Thia Megia) location. If Tripp doesn’t cooperate, Jack may promise that things are going to get a lot worse for all parties involved.

Fortunately, Jennifer Horton (Melissa Reeves) will be there to save the day. She’ll sneak up behind Jack and bash him in the head with something, which will give Tripp a chance to run. It turns out the blow will also jog Jack’s memory a bit, so it’ll be a win-win situation.

It sounds like another fantastic episode’s coming up, so don’t miss all the action. We’ll give you updates as other Days news comes in. Stick with DOOL and don’t forget to check CDL often for the latest Days of Our Lives spoilers, updates and news.