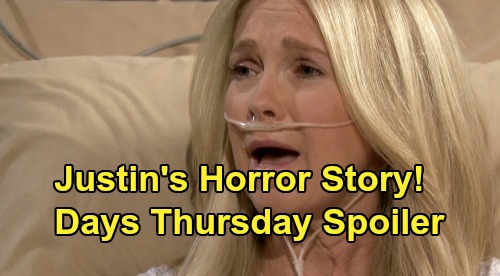 Days of Our Lives (DOOL) spoilers for Thursday, November 21, tease that some stunning moments are coming up. We should note that due to impeachment hearings coverage, it’s possible Thursday’s show will be preempted. If Days doesn’t air in your area, you can always catch up at NBC.com. It doesn’t look like any episodes will be pushed back, so we’re just passing that info along. Now let’s talk about what’s happening in Salem.

At the hospital, Jennifer Deveraux (Melissa Reeves) has some devastation headed her way. DOOL fans know Jennifer was in a coma for an entire year, so there’s been a lot to catch up on. Her loved ones didn’t want to overwhelm her with everything right off the bat – especially the big stuff like they people they’ve lost. However, the time has come for Jennifer to hear about a crushing death.

Days of Our Lives spoilers say Justin Kiriakis (Wally Kurth) will pay Jennifer a visit. Unless Jack Deveraux (Matthew Ashford) warns her beforehand, Jennifer will probably ask how Adrienne Kiriakis (Judi Evans) is doing. She may even wonder why Adrienne hasn’t stopped by yet. After all, Jennifer and Adrienne were quite close. They even worked together at The Spectator, so Justin’s terrible news should leave Jenn reeling.

After Jennifer learns Adrienne is gone, she’ll ask the question on everyone’s mind: How did Adrienne die? Justin will bring Jennifer up to speed on the accident that claimed Adrienne’s life as well as Will Horton’s (Chandler Massey) involvement. Days spoilers say Jennifer will be so sorry for what Justin and Sonny Kiriakis (Freddie Smith) have been through. Let’s hope Justin offers some new details about Adrienne’s accident during their conversation.

Of course, Jennifer will get updates on Haley Chen’s (Thia Megia) death sooner or later. Jack may not want to pile on another round of bad news just yet, but Jenn will hear about what JJ Deveraux’s (Casey Moss) been dealing with at some point. In the meantime, Xander Kiriakis (Paul Telfer) will have his own crisis to worry about. He just got a text saying that the baby would be returned as soon as he admitted what he did.

Xander may get the wrong idea, but Clyde Weston’s (James Read) minion should clear things up for him. If Xander wants Mackenzie “Mickey” Horton safely returned, he needs to take his confession to the cops. Days of Our Lives spoilers say Xander will do just that by the time Friday rolls around, but some twists and turns are coming in this storyline.

Over with Eric Brady (Greg Vaughan), he’ll chat with Roman Brady (Josh Taylor) about the future. Eric will feel like things are really looking up. He’s on cloud nine with Nicole Walker (Arianne Zucker) and Holly Jonas (Harlow and Scarlett Mallory), so he’ll be ready to take a big step forward. Days of Our Lives spoilers say Eric will plan on popping the question, but his proposal will go awry thanks to Nicole’s upcoming confession.

It sounds like the excitement’s about to rev up. We’ll keep you posted as other Days news comes in. Stay tuned to DOOL and don’t forget to check CDL often for the latest Days of Our Lives spoilers, updates and news.