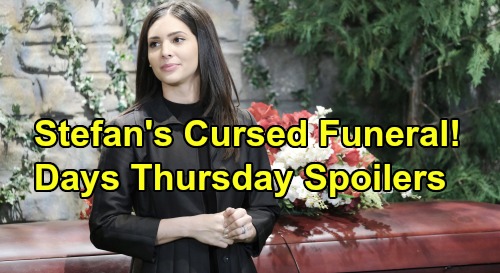 Days of Our Lives (DOOL) spoilers for Thursday, October 24, tease that Stefan DiMera’s (Brandon Barash) funeral will bring some tough moments for his grieving widow. Gabi DiMera (Camila Banus) will spend some time reflecting by Stefan’s casket. She’ll think about the wonderful life they could’ve shared and vow to avenge Stefan’s death. Gabi will refuse to let Lani Price (Sal Stowers) get her happily ever after with Eli Grant (Lamon Archey), so her plan to destroy their future will press on.

In the meantime, DOOL spoilers say Brady Black (Eric Martsolf) will awaken in bed with Kristen DiMera (Stacy Haiduk)! Of course, that probably won’t be as scandalous as it sounds. Brady settled in to watch some TV with Kristen, so he’ll probably just doze off and wake up beside her in the morning. Even so, Brady will continue to feel torn about this bond that’s developing between them.

Kristen will insist on attending Stefan’s memorial service, but Brady won’t know if that’s such a good idea. He’ll worry about the stress taking a toll on Kristen, so she should appreciate his concern. However, Stefan was Kristen’s brother and she’ll want to honor his memory. They didn’t know each other very well and had a complicated relationship, but Kristen will still plan to show her support.

Other Days spoilers say Jennifer Horton (Melissa Reeves) will battle confusion. After a romantic night with Jack Deveraux (Matthew Ashford), Jenn will stir in the morning and notice Jack is gone. Part of her will briefly wonder if this was all some incredible dream. Jennifer has been on cloud nine with Jack, so it’ll all feel just a little too good to be true.

Fortunately, Jennifer isn’t dreaming. Jack’s really back to normal, and that’s why he’ll head over to the Horton house on Thursday. Days of Our Lives spoilers say Jack will track down Jennifer’s old engagement ring. He’ll pick up some breakfast as he returns to their hotel suite, which will be important due to a special blueberry scone.

When Jennifer opens that scone, she’ll marvel at the ring Jack planted. Days of Our Lives spoilers say Jack will make a speech about his great love for Jennifer. He’ll ask Jennifer to marry him once again – and she’ll once again accept. This is exciting news, but major drama’s just around the corner! We’ll give you updates as other Days details emerge. Stay tuned to DOOL and don’t forget to check CDL often for the latest Days of Our Lives spoilers, updates and news.