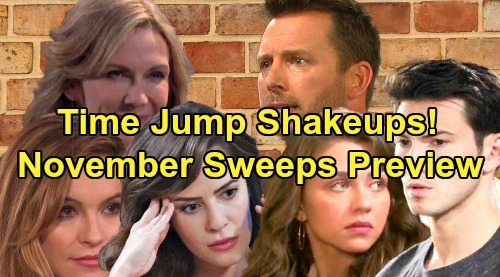 Days of Our Lives (DOOL) spoilers tease that the NBC soap will deliver some major fall drama. DOOL will honor the show’s 54th anniversary with a bold move on November 8. A time jump will move Days one year into the future, which will reveal plenty of story shockers and character upheavals. We’ve got a preview of the action happening for November sweeps, so let’s look at what’s cooking.

For starters, we should consider what’ll happen just before that crucial November 8 turning point. An attack on JJ Deveraux (Casey Moss) will turn his world upside down. The same goes for JJ’s concerned family. Jordan Ridgeway (Chrishell Hartley) will be behind JJ’s nightmare, which will sink her deeper into insanity. She’ll really be going off the rails as this time jump approaches.

Thanks to Gabi DiMera (Camila Banus), Lani Price (Sal Stowers) and Eli Grant’s (Lamon Archey) happiness should also be derailed. Their relationship will likely be shattered after Gabi’s blackmail, which will set up the time jump as well. Days of Our Lives spoilers say Justin Kiriakis (Wally Kurth) and Adrienne Kiriakis (Judi Evans) will be in a state of bliss, which won’t last long due to the one-year leap.

There’ll also be a few more baby storyline pieces moving into place for Kristen DiMera (Stacy Haiduk) and Sarah Horton (Linsey Godfrey). Later, the time jump will change everything for many Salem residents. Days of Our Lives spoilers say there’ll be plenty of romantic shakeups. One of those shakeups should be Gabi’s relationship with Eli, which is sure to break Lani’s heart – and enrage her, too.

If JJ indeed winds up in a coma, he may remain in one for a bit after the jump. However, this comatose patient will eventually rejoin Salem’s world and catch up on what’s happened over the last year. This character will serve as a useful guide for viewers. DOOL fans will learn what they’ve missed as this character gets the scoop, so that’s a solid strategy.

As for Adrienne, word has it she may be dead after the time jump. There’s no official confirmation on that yet, but it makes sense considering Justin is proposing out of the blue. Adrienne has barely even been around for months. Days seems poised to kill Adrienne off and get some good material out of it. Justin has a gripping storyline coming up, so everything appears to fit here.

There’ll also be some prison mayhem going on this November. At least two characters will land behind bars, so it’ll be interesting to see who they are and how their potential significant others are affected. Days of Our Lives fans will also see the extent of “Princess Gina’s” damage. Because of Dr. Wilhelm Rolf’s (William Utay) plot, Hope Brady (Kristian Alfonso) should wreak havoc over the next year in Salem. The show will skip that year, but we’ll certainly get to see the aftermath.

There’ll also be some flashbacks along the way to fill viewers in. Those will be helpful as these storylines move along. Of course, we’ll see two baby outcomes for November sweeps. Will Kristen’s kid with Brady Black (Eric Martsolf) survive? What about Sarah Horton’s (Linsey Godfrey) child with Eric Brady (Greg Vaughan)? A switch or some other offscreen trickery may be revealed sooner or later.

Chad DiMera (Billy Flynn) and Abigail DiMera (Kate Mansi) will also rejoin the action for November sweeps, so that’s something to look forward to. It’s always nice to see some familiar faces. There could also be a new face or two after this jump, so big changes are definitely looming.