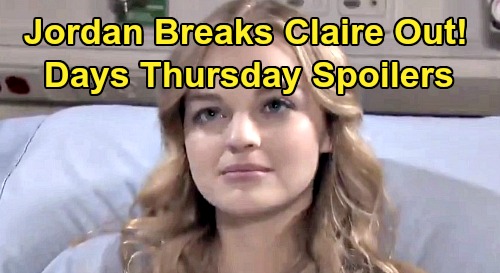 Days of Our Lives (DOOL) spoilers for Thursday, October 31, tease that Halloween will bring tricky situations for several Salemites. DOOL tends to do a special fantasy episode as part of the festivities, and it looks like this year will be no different. Things have been pretty chaotic in town, but they’ll take a truly crazy turn for Thursday’s fun.

For starters, Days of Our Lives spoilers say Tony DiMera (Thaao Penghlis) will drop a bomb on Marlena Evans (Deidre Hall). Word has it Tony will admit he’s not Tony after all – he’s Andre DiMera (Thaao Penghlis)! Of course, this should just be a confession in someone’s nightmare. Tony indeed seems to be Tony, and he’s very much in love with Anna DiMera (Leann Hunley).

Nevertheless, it’ll bring quite a shocker for Marlena on Thursday. Ben Weston (Robert Scott Wilson) will also deal with some drama as his deadly desires rev up. Days of Our Lives spoilers say Ben’s dark impulses will take control. It sounds like Ben will resort to violence again in his nightmare. He may be tempted to kill Jordan Ridgeway (Chrishell Hartley) and anyone else who poses a threat to Ciara Brady (Victoria Konefal)

This pattern of murderous dreams will continue for Ben as we build toward the time jump on November 8. Ben will have another lethal nightmare before he discovers a dead body next week, so the action’s definitely heating up. In the meantime, Days of Our Lives spoilers say Jordan will wreak havoc by heading back to Bayview. She’ll have a Halloween nurse’s costume on as she invites Claire Brady (Olivia Rose Keegan) to make some mischief with her.

Days spoilers suggest that Claire will take Jordan up on the offer – but again, remember all of this appears to be part of a wild fantasy episode. Even so, it’ll be interesting to see what kind of trouble Claire and Jordan stir up. DOOL fans can also expect some surprise returns as part of this Halloween special. Longtime viewers will enjoy a few nods to the show’s history, so stay tuned.

It sounds like some fantastic scenes are coming up. We’ll give you updates as other Days news emerges. Stick with the NBC soap and don’t forget to check CDL often for the latest Days of Our Lives spoilers, updates and news.