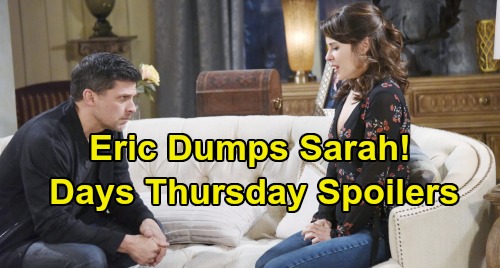 Days of Our Lives (DOOL) spoilers for Thursday, September 12, tease that Brady Black (Eric Martsolf) will rip into Kristen DiMera (Stacy Haiduk). He’ll hate the fact that she got off scot-free, but Kristen will just want to talk about their future. She’ll remain convinced that Brady wants her deep down, so she’ll push him to stop living in denial.

Of course, Brady will assure Kristen that he wants nothing to do with her. He’ll act like he wouldn’t be with Kristen if she were the last woman on earth. However, Brady still has some complicated feelings to work through. Even though he loathes what Kristen did, he can’t deny the strange connection between them. It’s lingering despite Kristen’s horrible behavior, so that should scare Brady a bit.

Other Days spoilers say a setback’s on the way for Jack Deveraux (Matthew Ashford) and Jennifer Horton (Melissa Reeves). They’ll face a disaster that could put Jack and Jenn’s memory mission in jeopardy. Dr. Wilhelm Rolf (William Utay) will finish the serum that could bring the real Jack back, but the lab will be demolished. It sounds like Dr. Rolf’s serum samples will be smashed once again.

Naturally, Eve Donovan (Kassie DePaiva) will find herself at the top of the suspect list. Her lawsuit against Jack won’t work out in her favor, so she’ll vow to destroy Jack’s shot at bliss. Days of Our Lives spoilers say Jack will eventually confront Eve about the lab destruction, but she’ll deny doing it.

There’s a good chance Eve will be telling the truth this time around. Dr. Henry Shah (Piter Marek) is the more likely culprit based on the latest DOOL info. He’ll make an appearance on Thursday, which should serve as a clue about what he’s up to.

Over with Sarah Horton (Linsey Godfrey), she’ll consider taking Vivian Alamain’s (Robin Strasser) advice. Vivian thinks Sarah needs to use every weapon in her arsenal and fight for the man she wants. Sarah’s got some pregnancy ammo she could use to her advantage, but she’ll choose to keep her mouth shut in the end. She’ll find it too difficult to come clean after Eric Brady (Greg Vaughan) declares his love for Nicole Walker (Arianne Zucker) and dumps Sarah on the spot.

Sarah already suggested they should call it quits, but Eric will make it official that he’s moving on with Nicole. He’ll hope Sarah understands and she will, but that won’t make this baby situation any easier. DOOL made it look like Eric might’ve overheard Sarah muttering about her pregnancy, but that won’t be the case. The secret will indeed stay under wraps for now.