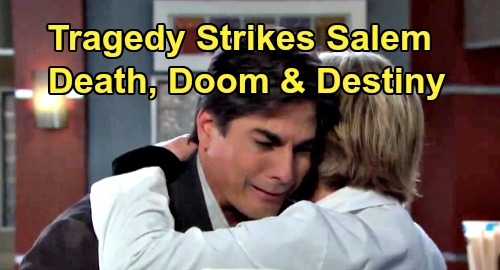 Days of Our Lives (DOOL) spoilers tease that we’re in for a riveting fall on the NBC drama. According to the new DOOL fall promo, this will be “the fall that tops them all” and is jam-packed with action and some big surprises, including a huge twist never before seen in daytime drama. We covered the romance and relationship drama that viewers will be seeing in a separate post, so here we’ll consider the action and intrigue aspects of the promo, as well as some serious health crises that will unfold.

First off, Jennifer Horton (Melissa Reeves) is shown in the promo apparently being held hostage, with a gag in her mouth. Exactly who’s got her and what their motive is remains to be seen, but it certainly looks like she’s in big danger. DOOL spoilers indicate that Jennifer and Jack Deveraux (Matthew Ashford) will embark on a big old-school adventure together this fall along with some help from JJ Deveraux (Casey Moss), so Jennifer’s predicament likely has to do with that.

And it looks like Jennifer won’t be the only one in danger this fall. Victor Kiriakis (John Aniston) is going to show his deadly side when he gets irritated about Ben Weston’s (Robert Scott Wilson) involvement in his granddaughter Ciara Brady’s (Victoria Konefal) life. Victor won’t want Ciara romantically involved with a former serial killer, and he’ll decide that Ben’s got to be “eliminated” from her life.

Unfortunately, when Victor says “eliminated,” he means killed, and DOOL spoilers indicate that he’ll order Xander Kiriakis (Paul Telfer) to kill Ben! And shockingly, the promo shows Victor standing behind Ben and forcefully wrapping what appears to be a necktie around Ben’s neck. Ben just can’t get away from his past, and it doesn’t look like Victor’s going to stop until Ben’s out of Ciara’s life. Will their love be able to endure Victor’s wrath?

A newly back-from-the-dead Vivian Alamain (Robin Strasser) will find herself in harm’s way as well. She’s shown in the promo lurking around in the dark in a hooded cape (which is a very Vivian thing to do), with Lani Price (Sal Stowers) standing behind her and holding her at gunpoint. What’s Vivian up to, and why she’s lurking around?

Well, it might have something to do with a disturbing aspect of the promo, which is a woman’s hand reaching out of the dirt in what looks like a cemetery, indicating that someone might have been buried alive. Of course, long-time DOOL viewers will remember that Vivian has a troubling history of burying people alive, so one wonders whether this all has something to do with her. We wouldn’t put it past her!

Next let’s turn to some big health scares. As DOOL viewers know, Julie Williams (Susan Seaforth Hayes) has just suffered a massive heart attack, and her condition will be quite serious thereafter. Hope Brady (Kristian Alfonso) and Jennifer are shown sadly embracing after Julie is wheeled into the hospital, clearly devastated by her condition.

They’ll soon find out that Julie needs a new heart, and there will be complications involving Julie’s eligibility for the transplant list due to her age. Doug Williams (Bill Hayes) will remain by her side throughout the ordeal.

And Julie won’t be the only one in dire condition. The promo also shows Kate DiMera (Lauren Koslow) in the hospital and on oxygen, and it doesn’t look good. But Kate’s problem will be Vivian-related, as Vivian will get her revenge on Kate by shooting her. Kate’s condition will bring Lucas Horton (Brian Dattilo) back on canvas, and he and Will Horton (Chandler Massey) will rally around Kate in her time of need.

In the midst of all of this, Kayla Johnson (Mary Beth Evans) is shown in the promo saying about someone that “there’s no neurological activity – they’ve done everything they can.” But who is she talking about? Could it be Julie or Kate, or perhaps someone else?

Meanwhile, the promo shows some scenes from Bayview, where Jordan Ridgeway (Chrishell Hartley) in a wacky nurse’s outfit tells a bedridden Claire Brady (Olivia Rose Keegan) “let’s go cause some mischief.” This could be taking place around Halloween, which might explain Jordan’s nurse outfit. At any rate, it will be great to see Claire again, and perhaps DOOL viewers will get updates on her treatment and current condition.

The promo also promises a huge twist that’s never before been seen in daytime drama, which is certainly a big statement. It must be something quite unusual and unique. After all, DOOL has already had storylines involved people being buried alive and Marlena Evans (Deidre Hall) being possessed by the devil. So, TPTB must have something big and explosive to unleash on fans.

And now for some miscellaneous goings-on in the promo: Princess Gina (Kristian Alfonso) makes an appearance, as she’s shown in royal garb looking in a mirror at herself, and one wonders whether this is a dream sequence. In addition, Gabi DiMera (Camila Banus) is shown crying uncontrollably next to a bed, and Xander is shown wearing a longer-haired wig and looking goofy.

That’s a lot of action, so it looks like we’ve got an exciting fall coming up, so stay tuned! We’ll give you updates as DOOL news comes in. Stick with the NBC soap and don’t forget to check CDL often for the latest Days of Our Lives spoilers, updates, and news.