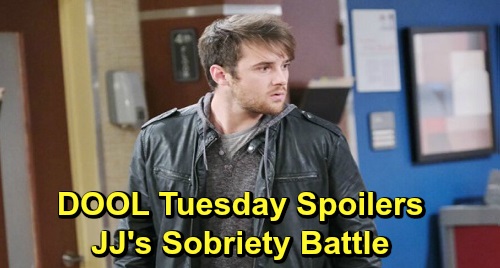 Days of Our Lives (DOOL) spoilers for Tuesday, December 17, tease that Lani Price (Sal Stowers) and Kristen DiMera (Stacy Haiduk) will do some plotting. After a relaxing spa day, Kristen and Lani will be ready to move forward with their takedown plans. They want to destroy Gabi Hernandez (Camila Banus) and take back their happiness, so they’ll need to prepare for whatever Gabi throws their way.

Elsewhere, Chad DiMera (Billy Flynn) will corner Kate Roberts (Lauren Koslow) and make some serious accusations. It looks like Chad will confront Kate about being in cahoots with Stefano DiMera aka Steve Johnson (Stephen Nichols), so she’ll have to think fast. Kate will deal with Chad’s outburst as best as she can and try to cover up just how much she knows.

Other Days of Our Lives spoilers say Marlena Evans (Deidre Hall) will deliver an ultimatum. She’ll be sick and tired of having “Hope Brady” aka Princess Gina Von Amberg (Kristian Alfonso) as a roomie, so she’ll push John Black (Drake Hogestyn) to get rid of her – or else! John will agree it’s time for “Hope” to go, so he’ll break the news and mention the reason why.

Marlena suspects that “Hope” has feelings for John, and “Hope” won’t deny it during this conversation. In fact, “Hope” will urge John to admit he has feelings for her, too. Days of Our Lives spoilers say John will shut that idea and kick “Hope” out immediately. He’ll make it crystal clear that his heart belongs to Marlena forever.

Over with JJ Deveraux (Casey Moss), he’ll face some struggles as he tries to get sober. JJ’s been battling a pill addiction for a while now, so he’ll need someone he can rely on in Tuesday’s DOOL episode. Days spoilers say Julie Williams (Susan Seaforth Hayes) will decide to step up for JJ in his time of need. She’ll do whatever she can to make JJ feel loved and supported as he fights for his future.