Days of Our Lives Spoilers: What Will Sami’s Return Bring – Will EJ or Johnny Accompany Her Home To Salem?

BY hellodrdavis on December 16, 2019 | Comments: one comment
Related : Days of Our Lives, Soap Opera, Spoiler, Television 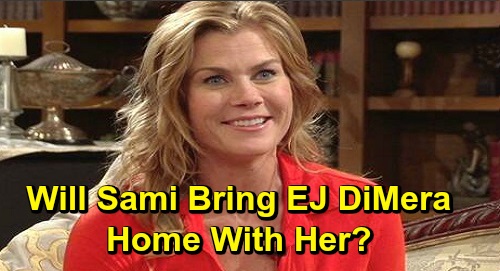 Days of Our Lives (DOOL) spoilers tease that Sami Brady (Alison Sweeney) will be back in action in Salem next year. That’s exciting news for DOOL fans, although given how far in advance the show tapes, we won’t be seeing Sami back on our screens until August of 2020. Still, it’s something to look forward to, and it raises all sorts of questions about what Sami will be up to at that point and who might return with her.

As DOOL viewers know, Sami is currently in Europe with her kids and tending to EJ DiMera (last played by James Scott), who has been recovering from his injuries sustained in the DiMera warehouse fire in Nashville. EJ was burned terribly in the fire, but he was also in bad shape from a cognitive perspective, as he suffered deficits from the serum that was used to bring him back to life by Willhelm Rolf (William Utay).

In fact, at the time of the fire, EJ appeared nearly catatonic. He just sat in his wheelchair and didn’t really communicate with or acknowledge anyone. At that time, he was under Rolf and Kristen DiMera’s (Stacy Haiduk) care, and he didn’t seem to be making much progress toward a recovery.

So one wonders what kind of shape EJ will be in once August 2020 rolls around. Might he be finally recovered and able to make the trip home with Sami? That would be pretty exciting for DOOL fans, especially since it means there could be the chance that EJ could be reunited with Stefano DiMera, who’s now inhabiting the body of Steve Johnson (Stephen Nichols). Of course, if that happens, then we could be looking at an EJ recast, which would be interesting in and of itself.

There’s also been ongoing DOOL buzz about Sami’s son with EJ, Johnny DiMera (Aaron and Griffin Kunitz), possibly returning to Salem. DOOL viewers will remember that Rafe Hernandez (Galen Gering) traveled to visit Johnny a while back, since he was having difficulties. It would make for an interesting storyline if Johnny were to return to Salem with Sami for a visit. He could reconnect with Rafe and even meet his grandfather Stefano, assuming that Steve is still Stefano at that point.

At any rate, time will tell what Sami’s return will ultimately bring…and who, if anyone, she brings with her. Are you looking forward to seeing Sami back in Salem next year? Stay tuned to DOOL and don’t forget to check CDL often for the latest Days of Our Lives spoilers, updates, and news.