Days of Our Lives Spoilers: Tuesday, February 26 – Gabi and Brady Plot Against Stefan, Chloe’s in Love – Haley Explodes at JJ 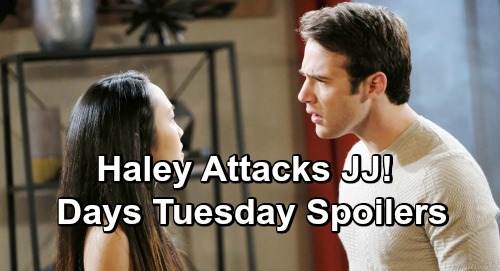 Days of Our Lives (DOOL) spoilers for Tuesday, February 26, tease that Chloe Lane (Nadia Bjorlin) will strengthen her bond with Stefan DiMera (Tyler Christopher). They’ll inch closer to each other now that they’re living under the same roof. Of course, Brady Black (Eric Martsolf) won’t be happy about that. In fact, his concerns will leave him open to an interesting partnership.

DOOL fans can expect Gabi Hernandez (Camila Banus) to make a pitch. She’ll believe they might be able to help each other out. Brady could advise Gabi on how to get Gabi Chic reinstated at DiMera Enterprises. In exchange, Gabi may agree to carry out a sneaky plan. She’ll probably think she can derail Stefan’s new romance with Chloe, which Brady would obviously be on board with.

Meanwhile, the aftermath of Jack Deveraux’s (Matthew Ashford) bombshell will be brutal. Melinda Trask (Laura Kai Chen) was shocked when Jack called her out for having a sister who’s an illegal immigrant. She’d hoped to keep that secret under wraps and become Salem’s next mayor.

Melinda cares about Haley Chen (Thia Megia) in her own way, so she’ll also hate the thought of Haley getting deported. That’s another reason why Melinda will play dumb and suggest she doesn’t even have a sister. Unfortunately, Jack may identify Haley by name and push Melinda to come clean. She’ll be backed into a corner before long.

After Jennifer halts the mayoral debate and sends everyone home, she’ll give Eve and Jack a piece of her mind. She’ll be hurt that Jack would betray JJ Deveraux (Casey Moss) like this. Days of Our Lives spoilers say Eve will defend their stunning move, but Jennifer will insist that it was heartless and unnecessary. She’ll definitely worry about the difficult road ahead for Haley.

You can bet Haley will worry about what’s next, too. Days spoilers state that Haley will be a mess as she confronts JJ. She’ll ask how he could rat her out and not even warn her. Despite JJ’s apologies and excuses, Haley will blast him for his betrayal and take off. She’ll realize she has to get out of there since the cops will be looking for her soon.

JJ will be left wondering how he can fix the nightmare he’s created, but that certainly won’t be an easy task! We’ll give you updates as other Days news comes in. Stay tuned to DOOL and don’t forget to check CDL often for the latest Days of Our Lives spoilers, updates and news.