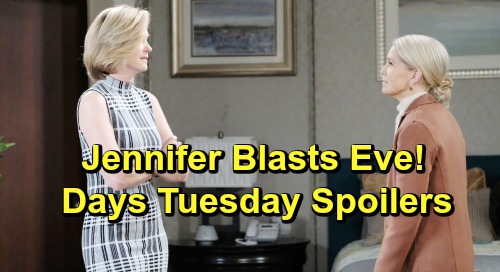 Days of Our Lives (DOOL) spoilers for Tuesday, June 11, tease that Ben Weston (Robert Scott Wilson) will remain adamant that he’s an innocent man. He simply got caught in the wrong place at the wrong time holding the right evidence! Unfortunately, Eve Deveraux (Kassie DePaiva) is determined to lock Ben up and throw away the key, so the truth doesn’t matter.

Claire Brady (Olivia Rose Keegan) will remain on edge, but she’ll trust that Eve can take care of this. Eve really needs to wise up and realize Claire’s dangerous, but her desire for revenge should keep Claire out of trouble for now. However, Ciara Brady (Victoria Konefal) will soon realize Ben was right about Claire the arsonist, which means a plot’s brewing to take Claire down!

In the meantime, Haley Chen (Thia Megia) and Tripp Dalton (Lucas Adams) will be taken into custody. ICE will deal with them after their arrests, but they’ll need treatment at the hospital first. It won’t be long until JJ Deveraux (Casey Moss) shows up at Haley’s bedside. Days of Our Lives spoilers say they’ll share some tender moments as they accept that Haley’s deportation is still happening.

On the bright side, at least Haley didn’t face a fiery death. JJ will be glad Haley lived to tell the tale, even though their plan failed miserably. Days spoilers state that JJ and Haley shouldn’t give up just yet. There has to be a way out of this mess, so maybe Melinda Trask (Laura Kai Chen) will find it eventually.

Until then, DOOL fans can watch Jennifer Horton (Melissa Reeves) rip into Eve. She’ll be even more fed up than usual now that Eve’s the ruthless police commissioner. This job gives Eve too much power, and she’s clearly abusing it. Days of Our Lives spoilers say Jennifer will have a major outburst, but Eve won’t pay much attention to her archenemy’s complaints.

Over with Sonny Kiriakis (Freddie Smith) and Will Horton (Chandler Massey), they’ll have some bittersweet news for Gabi Hernandez (Camila Banus). She’ll learn they’re getting married, which would be more exciting under better circumstances.

Will has accepted that death is imminent, but he wants to make the most of the time he has left. Marrying Sonny again is how he intends to do that, so Gabi will try to be happy for them. Even so, Gabi will hate that she’s losing a close friend and Arianna Horton’s (Harper and Sydnee Udell) losing her father. She’ll worry about what the future holds while Will enjoys the here and now.

Thankfully, things will turn around for Will next week, June 17-21! We’ll give you updates as other Days details emerge. Stay tuned to DOOL and don’t forget to check CDL often for the latest Days of Our Lives spoilers, updates and news.