Days of Our Lives Spoilers: Tuesday, May 7 – Nicole Loses It Over Holly’s Death in Van Explosion – Ted and Xander’s Plan Works

BY Heather Hughes on May 6, 2019 | Comments: one comment
Related : Days of Our Lives, Soap Opera, Spoiler, Television 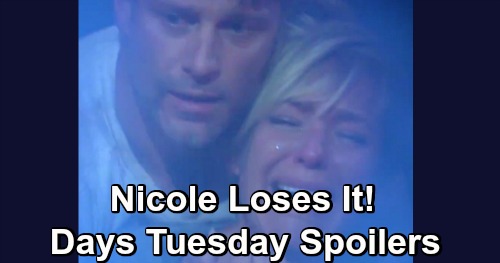 Days of Our Lives (DOOL) spoilers for Tuesday, May 7, tease that Nicole Walker (Arianne Zucker) and Eric Brady (Greg Vaughan) will get some terrible news. Hope Hernandez (Kristian Alfonso) just received word from Rafe Hernandez (Galen Gering) about the accident, so she’ll make sure Eric and Nicole get updates ASAP. It won’t be long until all three of them are racing to the crash site to learn more.

Rafe was in hot pursuit when the van believed to be carrying Holly Jonas (Harlow and Scarlett Mallory) went over the side of a cliff. He wasn’t supposed to be involved in this at all, so Hope will be furious with him for making things worse. Nicole and Eric obviously won’t be happy with Rafe either, but anger won’t matter much right now. Everyone will want to focus on Holly and pray for a miracle.

Ted Laurent (Gilles Marini) will join Rafe as they prepare for search for survivors. They’ll plan to head to the bottom of the hill and look inside the van, but an explosion will stop them dead in their tracks. Days of Our Lives spoilers say Nicole will cry out in horror as she realizes the worst has happened. She’ll think Holly must’ve died in the blast, so she’ll completely lose it.

Days fans can expect Eric to comfort Nicole at the accident site, but things will take a tense turn when they arrive home. Eric promised Nicole everything was going to be OK, but he was wrong about that. Nicole will blame Eric for Holly’s death, so look for this confrontation to heat up even more on Wednesday’s new Day’s episode, May 8.

Thankfully, Holly won’t really be gone forever. Ted and Xander Cook (Paul Telfer) have her tucked away somewhere safe, so at least we know Holly’s all right. On another positive note, Days of Our Lives spoilers say John Black (Drake Hogestyn) and Dr. Marlena Evans (Deidre Hall) will have something to celebrate. It’ll be their six-month anniversary, so that’ll bring joy to an otherwise dark DOOL episode.

It sounds like some hot drama’s ahead in Salem. We’ll keep you posted as other Days details emerge. Stay tuned to DOOL and don’t forget to check CDL often for the latest Days of Our Lives spoilers, updates and news.