Days of Our Lives Spoilers: Ben Seeks Relationship With Baby David – Lani Pushes Him Away

BY hellodrdavis on May 6, 2019 | Comments: one comment
Related : Days of Our Lives, Soap Opera, Spoiler, Television 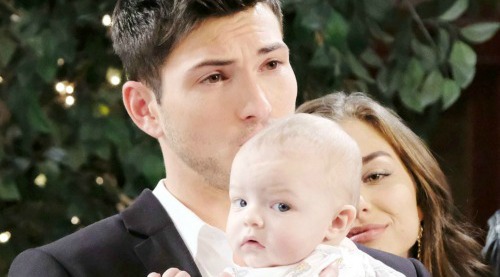 Days of Our Lives (DOOL) spoilers tease that Ben Weston (Robert Scott Wilson) will have a lot on his mind in the coming days. He’s been frantically searching for a missing Holly Jonas (Harlow and Scarlett Mallory) after the little girl went missing from the DiMera mansion.

It’s been a lot to deal with, but unfortunately his efforts will come to an end soon when Holly is presumed killed in a terrible explosion. But soon after, Ben’s attention will turn to another child – his sister Jordan Ridgeway’s (Chrishell Hartley) baby, David.

Thus far, David has been under the watchful eyes of Rafe Hernandez (Galen Gering) and Lani Price (Sal Stowers). Lani has even taken a leave of absence to care for David, and she’s become quite protective of him. She was also very reluctant to let Ben anywhere around David previously, and it looks like that will continue to be the case.

But Ben will decide that he wants to have a relationship with his nephew. After all, David is his relative, and he’ll want to have a part in his life. It’s not like he’ll want to raise the baby on his own, but he’ll at least want to have some contact with David. And Ciara Brady (Victoria Konefal) will want to help him see that this happens.

However, Ben and Ciara are going to run into a snag on that front. Lani will have a big objection to a former serial killer being anywhere near David, and she’ll set out to make sure that Ben gets nowhere near the little boy. She’s been seemingly with David 24/7 lately, and it looks like that will continue, as she’ll soon move into Rafe’s house to be able to take care of David.

According to Days of Our Lives spoilers, Lani will have an interaction with Ciara, who will be advocating on Ben’s behalf. Ciara is just as protective of Ben as Lani is of David, and she’ll make it clear to Lani that Ben has a right to see his nephew and spend time with him. But DOOL spoilers say that Lani will tell Ciara a big lie to keep Ben away from David.

Exactly what Lani tells Ciara remains to be seen, but it will be something that ultimately prevents Ben from getting to spend time with his nephew. Of course, Lani will only be able to keep Ben away from David for so long – after all, she can’t hide David away if Ben is persistent about wanting to see him.

It will be interesting to see what happens with David going forward. Lani seems hopelessly attached to him, but then again, Ben is next of kin to the baby, so if he wanted to press the issue, he could probably get a court order to have some visitation with the child…something that would really rattle Lani at this point.

Do you think that Lani will come around and let Ben see his nephew? Stay tuned to DOOL and don’t forget to check CDL often for the latest Days of Our Lives spoilers, updates, and news.