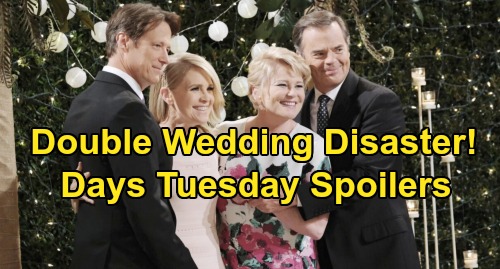 Days of Our Lives (DOOL) spoilers for Tuesday, November 5, tease that a double wedding will get underway. It was brutal watching Lani Price (Sal Stowers) break Eli Grant’s (Lamon Archey) heart, but it’s time to focus on some happier nuptials. Jack Deveraux (Matthew Ashford) is all set to remarry Jennifer Horton (Melissa Reeves), and Justin Kiriakis (Wally Kurth) will tie the knot with Adrienne Kiriakis (Judi Evans) again, too.

DOOL fans can expect some trouble from Eve Donovan (Kassie DePaiva) on Jack and Jenn’s big day. She’ll pull a last-minute stunt in hopes of derailing the ceremony, but her stunning claims won’t matter in the end. Jack and Jennifer’s wedding will move forward along with Adrienne and Justin’s. It won’t be long until they’re posing for pics and headed to their reception.

However, Jennifer will take a dangerous detour before the rest of the festivities kick off. Ahead of the party at the bistro, Jennifer will discover Dr. Wilhelm Rolf’s (William Utay) secret. She’ll realize what’s on the flash drive, so she’ll know all about Hope Brady’s (Kristian Alfonso) transformation into Princess Gina.

Days of Our Lives spoilers say Princess Gina will refuse to be exposed. She’ll decide to take matters into her own hands, which will mean bad news for Jennifer. They’ll get into a fierce argument before Princess Gina pushes Jenn off the balcony. She’ll send Jennifer plunging down into the town square below, where Jack, JJ Deveraux (Casey Moss) and Haley Chen (Thia Megia) will gape in shock.

This obviously isn’t how Jack expected his wedding night to go, but he’ll just have to deal with Days’ latest bombshell. It won’t be long until Jack, Haley and JJ race to injured Jennifer’s side. Days of Our Lives spoilers say Jennifer will be rushed to the hospital and will receive emergency surgery later this week.

As for Princess Gina, she’ll get the flash drive back and protect this crazy secret. Dr. Rolf’s plan will move forward, so that’ll set up some serious time jump drama in Salem! We’ll give you updates as other Days details emerge. Stay tuned to DOOL and don’t forget to check CDL often for the latest Days of Our Lives spoilers, updates and news.

Salem is abuzz with three weddings – Jennifer and Jack's, Adrienne and Justin's and Lani and Eli's – but will there also be a funeral? Watch @DAYS, weekdays on @NBC. pic.twitter.com/lF5fzm2ev1